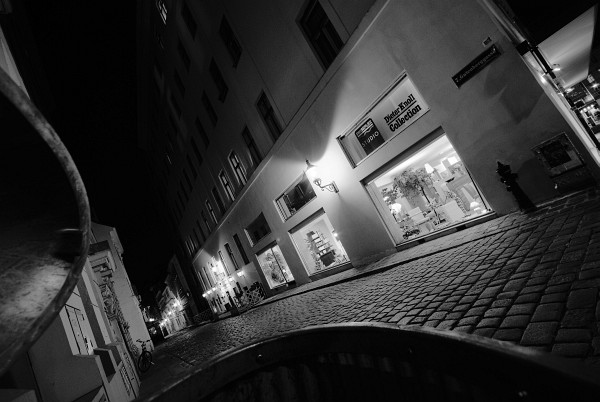 Today at noon I went back to the park with the playground, mainly to get a perfect variant of an image I had already tried yesterday, and later at the way back to work I made some images of a red Ducati motorcycle, one of them quite good. After these about 30 minutes I was confident to have at least two or three good candidates, all of them in vivid colors.

I was wrong. In the evening, on my way home, I came by Gutenberggasse in Vienna’s 7th district. On the corner there was an open garbage can, one of the sort that are mounted on lamp posts. Normally they have a cover on top with only a small opening, but this one had the lid raised. I don’t know why, but somehow this attracted me, maybe because it looked different in a way. I put the camera on the garbage can, set the Sigma 10-20/4-5.6 to 10mm/f.8, held my breath and clicked. It took two exposures to get a sharp one.

According to the terminology of yesterday, this is again a (3), a weird perspective. What makes the image for me are the curves of the garbage can and its lid.