4 - Tales From the Playground 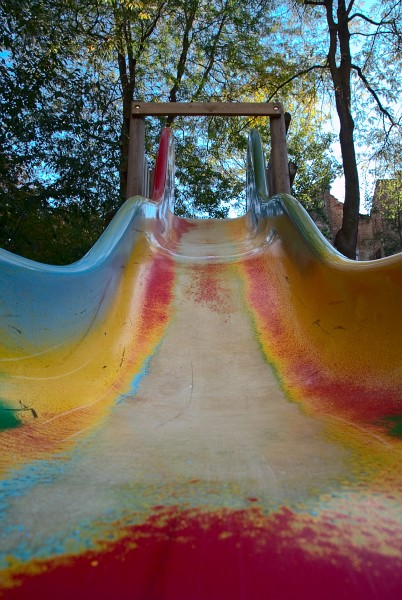 Did I mention yesterday that Bryan Peterson nudged me towards color? It’s fascinating: I have to look for it, but of course it is there. Plenty of it and everywhere. The funny thing is, we seem to mostly disregard color in our everyday life. This may have been different in a time when every single day was a struggle for survival, but it seems that nowadays it is enough to be able to coarsely distinguish between red and green. And even people who can’t do that get easily away with it.

In some way this disregard for color must have strongly influenced how as beginners we take photographs. It is fairly easy and obvious to look for proportions, for lines, for tonality, but color, at least for me, was always something of an afterthought. Good if there, but hardly the reason for taking a photograph. Actually I consciously oppose this tendency now, and all these last images are a result of that.

Compositionally this image is quite OK in my book. It’s symmetric, yes, but the juxtaposition of yellow and blue keeps the eye moving. I would probably have liked to get a child in the image, but in fact I’d really be careful photographing other people’s children on a playground. It is rather easy to be taken as a child molester hunting for prey. Or is this hysteria only? Quite a sick world when I think of it.

Anyway. Technically this image is the result of half an hour of photoshopping. Not that it looks so much different from the original that came out of the camera, but the work is in the details. Mostly I have added light to the inside of the slide and drastically pushed color and contrast, while leaving alone the trees and the sky.

While being there I probably could have achieved something similar with a very soft fill flash, but of course not with the camera’s popup flash. I was too near the slide and even took a vertical. The flash would have ruined everything.

I probably can’t do too much photographing tomorrow, thus the next image may end up being one of today’s. That being said, have a nice day 🙂