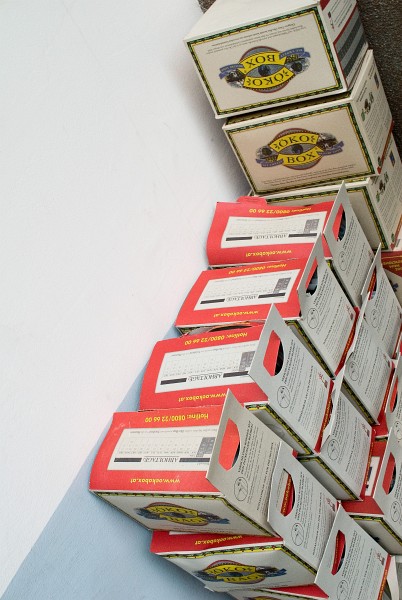 I’m still not up to my prime, but, Goodness, is that good to be back in business! Don’t get me wrong, I did have a lot of fun shooting self portraits and I will come back to that, probably after buying Nikon Camera Control Pro for tethered shooting. On the other hand, it’s fine to have lots of choices about what kind of garbage you shoot 🙂

Once there was the ugly old glass bottle. It was heavy, fragile and did not stack too well. After many, many years of research the good Dr. Ruben Rausing of Lund, Sweden, invented an ingenious solution to all problems of packaging fluids, founded his company Tetra Pak, and the world was happy again.

There was only one tiny little problem: The ugly old glass bottle had been used multiple times and there were established systems for recycling. Not only that the Tetra Pak had no recycling system in the beginning, it even did not recycle all too well. At least you could not use those damn things for packaging any more than once.

Years of lobbying later, Austria had such a system. It’s called the Eco Box and people are expected to wash the Tetra Paks, make them flat and put about 50 of them into such a box. These boxes are collected with the garbage and, as far as I know, converted to insulating material.

This morning on my way to work (I don’t always like being at work, but I always like what I find going there) I saw a big number of these boxes leaning against a wall, making a pattern. I took the image with the Sigma 30/1.4 at f8.