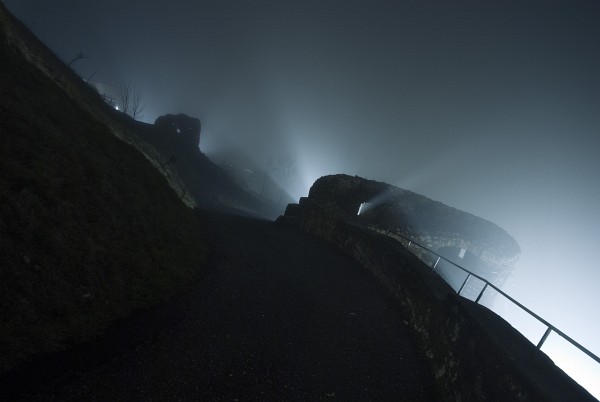 Quite a busy day today. Well, yesterday, technically. In the morning I had various businesses that kept me from shooting, but when I began in mid-afternoon, I started out with a good candidate, an image of water running into a wash basin. Always a fine feeling when your work is basically done, and everything that follows is for fun.

I drove to Klagenfurt to buy some things, and when I arrived there the rain stopped and the fog got thinner, so that I could see a partly cloudy sky with blue in between and first traces of red. A quick calculation gave me confidence that I could make it to some place above the fog, just in time for the sundown.

I selected Griffner Berg, just to the north-east of Griffen, about 20 km east of Klagenfurt. Years ago the B70, Packer Bundesstraße, was the main road between Klagenfurt and Graz, now for non-regional traffic mostly obsoleted by the highway A2. Griffner Berg was always unnerving, the lorries almost seemed to wait at its base, just to drive on immediately before you, driving you mad with their slow pace all the way up. In other words: it was no fun.

No such problem today, I was there in time, it was high enough to be above the fog, everything was as expected except two tiny problems: The soup in the west had become so thick that no trace of a sundown could be seen, and if that had not been the case, there would still have been the beautiful high-voltage power line right through my field of view at the only reasonable viewpoint. OK, that’s for that. Good to know. I still had the wash basin.

When I got down to Griffen, I had the idea to go up to the ruins of Griffen’s castle. Griffen has a big lump of rock right at the center, with a castle atop, and since a couple of years the ruins are illuminated at night. I had never been there, I had time, so I thought, “why not”?

I parked in front of the church and took the newly built stairway up the hill and, some minutes later, quite out of breath, I stood maybe 50 meters above the town. I started in civil twilight and stayed there for more than an hour.

In the end, while going down, I shot this image.

Whoa! It's the comic-book-art angle which injects so much power into this abstract. I love it that it's a monochrome filling the space with NOIR! Noir is king in so many prescient images. And the grainy fog pierced with beams and glows allow the twin triangles to compress the information against the huge negative space in the southwest. I can hear minor chords played loud here. This must be astonishing in a large print. Great work skipping rignt along the line between "Wow!" and "Hmmm..."


Thanks for sharing it.