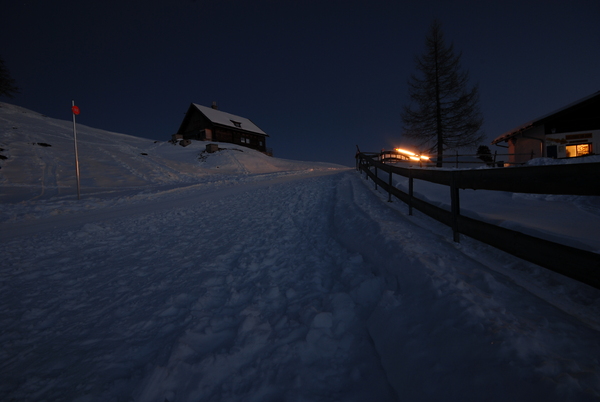 Today was the first time that I drove up “Dobratsch” in the afternoon for a sundown shooting. Being my sunrise mountain and at the parking area facing east, it is not a logical candidate, but I had business nearby in Villach anyway. I figured there would be some hill easily reachable from the parking area that gets at least late sun, and so it was.

I shot quite a number of nice images with the Sigma 10-20, and when I went back to the car it was already quite dark as a snowcat passed me by. I grabbed the camera, but it on the tripod, sort of composed, and instead of getting the light trail that I had hoped for, I was only able to catch the image you see here, with the snowcat all but gone. When I finally saw the image, I realized that it was entirely different from what I had intended, but had its own charme. The image is the unmodified JPEG that came out of the camera.

Among the questions which I routinely harrass my artist friends is, "How much of your final work was 'discovered' during the process of creation? It is the rare respondent who reports less than 50%, and many admit to as much as 100% during many of their favorite works. It is the delight of artistry to 'find' art within our creative capacities. Sometimes I wonder whether our craft allows us to do art, or uncover it.