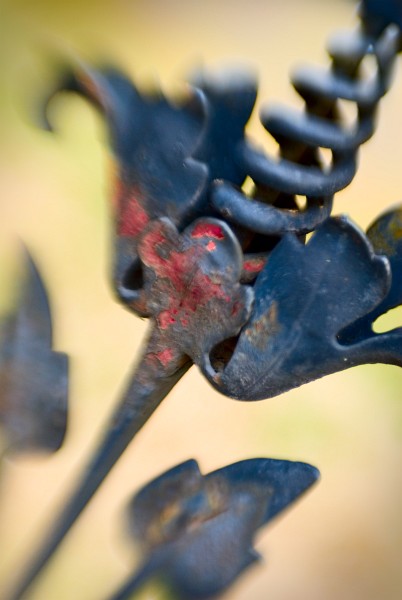 This is part of the small, knee-high fence around Vienna’s historic museums. I’ve treated it in a way similar to “118 - Bloody Dangerous”, i.e. turning rust into blood. It reminds me of an épée, D’Artagnan style, that and the two leaves made for the Romance in the title. The idea somehow fascinates me, so this may well turn into a series.

The idea to keep the Photoshop files has turned out quite successful. It’s 1.4GB in 5 days, but with the archiving scheme I mentioned, it does not bother me. It looks like I’ll get roughly two or sometimes three weeks worth of work onto one archival DVD, and this means I’ll keep between two and six weeks on disc. That’s OK.

Without much of searching I’ll let the Guardian have the Story of the Day. They report that, according to Unicef, the UK is the “worst place to be a child”, at least in a lineup of 21 highly developed states. This worries me a lot, because I can remember how shocked I was, when I first came to London in 1988 or so, and I saw homeless people sleeping in the entrances of shops. OK, this was Margaret's time, but when it comes to the disruption of civil solidarity by the neo-liberalist notion that the state has to keep out of, well, basically everything, and that public welfare is best left to the mega-corporations, the UK has been avant-garde in Europe. Today, seeing homeless people in our cities is not uncommon at all.

In the light of where this all originated, it’s quite ridiculous when Labour is attacked by the Conservatives. After all it’s their legacy that Labour has never managed to dispose of. But that’s how politics work. It’s all about hypocrisy, populism and the short memory of the public.

How do other nations? The bottom five are Portugal, Austria, Hungary, the US and the UK. Great. Let’s see how that features in Austria’s news.

By the way, the referendum in Portugal turned out as expected, i.e. pro-abortion in early pregnancy.

The colors are so damned evocative of Disney. I feel a smile coming on and expect to hear elves or dwarfs singing and dancing off stage right. I can't consider anything this joyfully lit to be sinister or bloody. Nope, more gleeful and warm. It makes me yearn for Jiminney Cricketd, or Tinker Bell. And the motion blur in the background reinforces the suggestion of dancing impliments. I know... Beauty And The Beast, right? Yesssss.... This lead thing has a French accent and sings about castle living.
Oh BTW... technical stuff... dead on... composition... deader on.