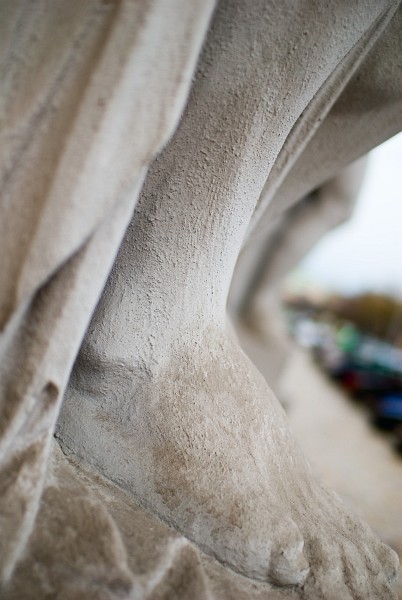 Austria really is the land of caryatides and telamones. You find them everywhere on all kinds of architecture dating from between the age of Baroque to the first half of the 20th century, and this really accounts for the greater part of Austrian architecture.

Basically, architecture tells a lot about the economic history of a country. Take southern France. You find the most wonderful Romanesque architecture, but what little there is of Gothic, has a very military style, devoid of the lightness you normally find in Gothic architecture. Why? Because Gothic replaced Romanesque architecture just at the time, when Philippe II of France took the excuse of acting against the Catharist heresy, to conquer the rich southern provinces of Languedoc, that up to this time had been greatly independent. Gothic in Languedoc is the military architecture of an oppressive force. Just look at the Cathedral of Albi and you know what I mean.

When the French had finished with the last resistance, Languedoc no longer was a rich and culturally flourishing region, it was impoverished, almost nothing of importance was built for a long time, and the net effect of all that slaughter is, that today in southern France we can see the wonders of Romanesque architecture like nowhere else.

Not so in Austria. Austria was at its full power up to World War I, and that meant a constant replacement of old architectural substance. Today you won’t find much Romanesque or Gothic architecture in Vienna, with the exception of some churches, albeit some important ones. All the rest is Baroque or later. That’s why Austria really is the land of caryatides and telamones.

The title of this entry is inspired by the Song of the Day, “Happy Feet, Musica Per I Vostri Piedi, Madame” by the divine Paolo Conte, originally from his album “Parole d’Amore Scritte a Macchina”, but in this case I prefer the version from the live album “Tournée”. See here for a sound sample.