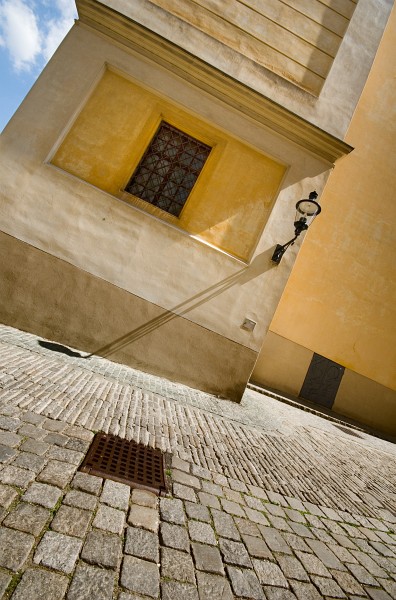 Today I wanted to buy a book. That’s the reason why at noon I took an hour off. I didn’t get it, but on my way from the bookshop back to work I passed the church on Sankt-Ulrichs-Platz. This is not uncommon. I’m frequently there, it’s on my usual way to work, but it is uncommon for me to be there at that time of day and in that light.

It was the shadow of the lantern that grabbed my attention. I took some photos and none of them satisfied me, so I finally changed from the Nikon 18-200 to the Sigma 10-20, and there it was: pure geometry. It’s not really about the shadow any more, but that’s OK for me.

The Song of the Day is Bob Dylan’s “All Along the Watchtower”, originally from the 1967 album “John Wesley Harding”, but I guess today we go for the electrically loaded version on “Before The Flood”, his 1974 live album with The Band.

But it is still about the shadow. It got my attention and held it for some time. Maybe its the pure black, or the angle or the simplicity of it. It's probably all those things and more. Another example of your talent for discovering art in the simplest objects. This is definitely one of my favourite images from your posts.