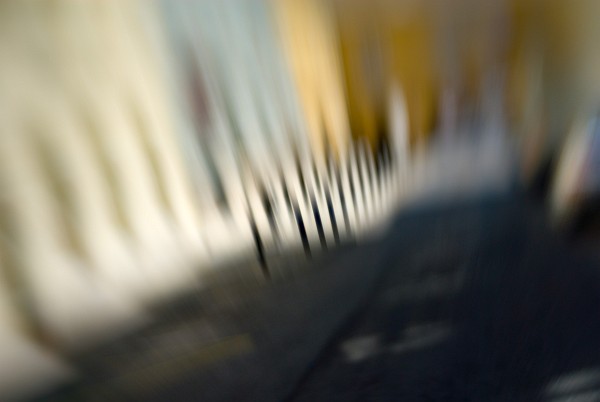 The Lensbaby is great for abstracting parts of an image that would look busy with an ordinary lens. You simply bend the lens and throw these parts out of focus. At least that’s what one normally does, but nobody says that you have to stop at that. What about bending the lens so much that everything is wildly distorted and more or less out of focus? What about using the linear distortions and aligning them with lines of strong contrast in the scene?

That’s what happened here. This is Trautsongasse, a short street in Vienna’s 8th district that is frequently used as location in movies. Well, on Thursday I was out to lunch and when returning I shot this image. I was mainly interested in using and accentuating the strong contrasting lines in the center. Bending the lens so strongly, made the whole scene look somehow liquid, like melting, and this is another thing that fits, because it was an unusually hot day.

The Song of the Day is “In Liquid Days” from Philip Glass’ 1986 album “Songs from Liquid Days”, a collaboration with Laurie Anderson, David Byrne, Paul Simon, Suzanne Vega, the Kronos Quartet, Linda Ronstadt and others. And not only that, it’s even good 🙂