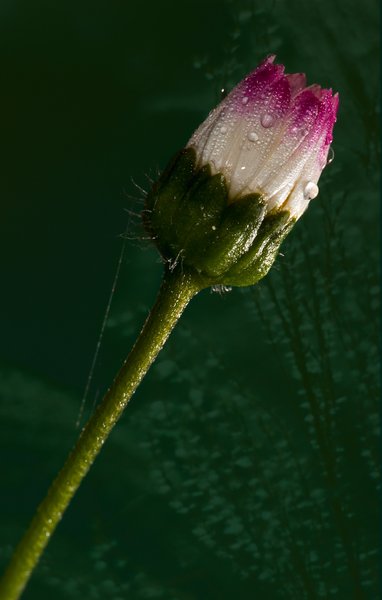 At the moment I’m constantly one day behind, but with a little luck I’ll catch up today.

Yesterday was rainy and I had to resort to macro photography. It was late when I began and it took me four different flowers until I came up with anything halfway decent. This is not a particularly ingenious composition or so, but I feel lighting is quite OK, so all tribute to Nikon. The flash system is really top notch.

This daisy looks a little bit like an Italian flag or maybe a Hungarian, depends on how you look at it. The background was originally a dark pale green, but I have overlayed a slightly blurred version of some grass that I have shot last fall.

The Song of the Day is from one of Italy’s most favorite cantautori, Francesco De Gregori. It’s “Viva l’Italia”, originally from the 1979 album of the same title. I have it on the 1994 live album “BOOTLEG”. Unfortunately I could not find a sound sample from that, so I’ll have to direct you to the greatly different 1979 version.

The subtlty of your PP is like a great chef's use of condiments. The final offering is enhanced but never ovewhelmed. Sweet.

Thanks for sharing
Ted

My Images Explained
My Images Stored