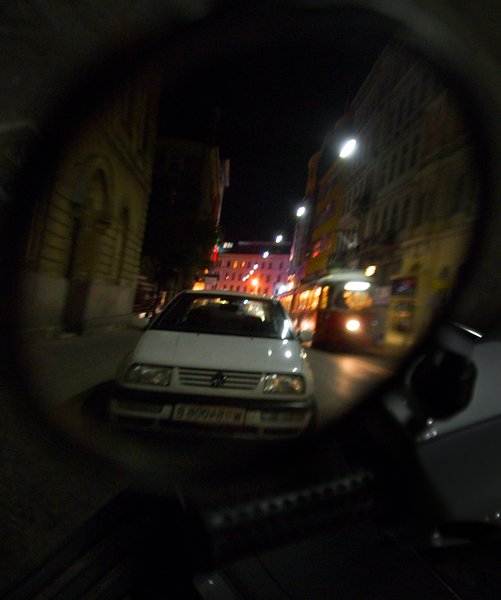 Life’s about choices, right? Well, I had the choices of either annoying you with another flower image, or breaking the Law and presenting you an image from Wednesday night that I really like. I chose to break the Law, after all, it’s mine 🙂

More choices. Yesterday I chose to not take my camera into the concert of Romanian brass band “Fanfare Cioc?rlia”. Bad choice! The concert was one of the best I’ve ever seen, and at the end they simply left the stage and played on in the foyer, in the midst of a dancing crowd. Spectacular! Ecstatic! I could have shot a hundred images, but on the other hand, dancing in ecstasy was not a bad choice either 🙂

If you don’t know Fanfare Cioc?rlia, you really should sample some of their albums, e.g. the 2001 release “Iag Bari” or the recent “Queens and Kings”. Or any other. They are all that good.

But back to this image. It is not that it is terribly original, there are millions of images shot of the reflection in a scooter’s mirror, and even I have made some of them, but what I like in this particular one is the lucky moment, the dynamism that lies in the antagonism between the parking car and the moving train. And there’s more to it. If you only look at the car, it looks like moving as well, just before an imminent crash with the viewer.

I love mirrored images, esp in mirrors like this one that distort somewhat. I too thought the car looked like it was going to crash into you, but on closer look, I can see that it isn't, lol. I love the diagonals in this and the night lights and shadows. Excellent image 🙂

Flo - BTW, what's with this "word verification" gizmo? Sometimes it makes me type in 2nd word, even tho I thought I'd typed the first one perfectly. It's annoying. 😏

It's annoying, yes, but please read the story why I use it in "6 - Don't Comment on This".

You can experience the only alternative on Corey Bienert's blog. He has chosen to moderate comments, and in my eyes that's even less satisfying for the visitor, not to speak of the additional work for him. It's still a good idea to pay him a visit though. There are really some gems to be seen.

I think that these verification "words" have a short lifetime, so when it takes you long to compose your comment or you take a break in between, verification would fail and you'd have to enter the next code given.

Jepp, that word verification thingy is annoying. But at least I can certainly see the point here.

But that I have to re-type my name and my web-address each time I visit your blog is one of the more mindless things. I assume it's a "feature" from google in order to convince you to get yourself an account...

Ah, whatever. As usual, a very flavourish picture. For me the overall impression is rather dynamic, streetlife, nightlife. Might have been influenced by your text and the soundsamples though...

You don't do enough of these cinematic moments. This projects that sort of story arc you expect to blast from the Bourne series. It captures how folks who have never been there expect night in a rich gritty European city to feel. POWWW! Yeah... very warm... very warm.

You're right, I don't do enough of them. If there are any images that I like most, than it's these. Unfortunately it takes - much more than chance - a certain kind of inspiration to make one, and I have no idea how to provoke that. It comes or not, and at the moment I'm just thankful if it does 🙂