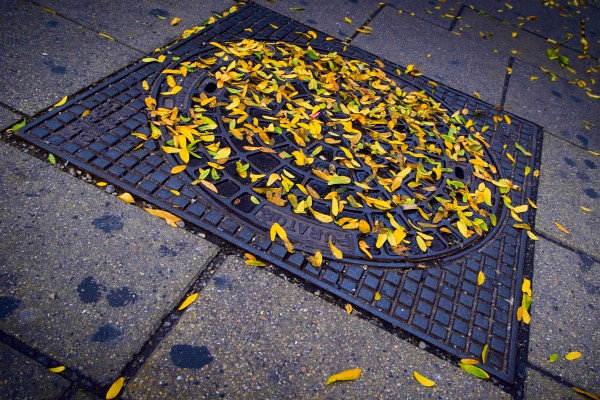 This image is from yesterday morning. I was packed like a mule and had decided to take the Underground to work. In Mariahilferstraße, where the station is, the first leaves are already falling, and it’s that tiny, yellow kind of leaves that will grace the street for maybe two months now. The way the leaves cling to the recessions of the manhole cover reminds me of a mandala, almost gone with the wind.

Technically, this was shot with the Sigma 20/1.8 (what else🙂 at f8, and then heavily post-processed in Photoshop. I have corrected the distortion (rather high for a prime, but we know by now that this is not any other prime, and so I couldn’t care less) in PTLens (I do that normally with architectural shots but don’t mention it most of the time), cleaned up some debris, drove colors into a yellow/purple opposition, pushed saturation, added tons of contrast and finally a vignette.

Holly Cole at the beginning of her career, singing Tom Waits’ “Purple Avenue”, a.k.a. “Empty Pockets”, that’s the Song of the Day, and you hear it on her 1992 album “Blame It on My Youth”.

Great colour and composition. I really like the way the majority of the leaves are on the circular part of the manhole cover. Another example of an image which most peoplemyself included, would pass by without giving it a second look.

Are these leaves or seed pods? I know I have envied your early Austrian spring, but does that mean a consequently early autumn?

There is something so melancholy about fallen leaves and gutters. Each evoke an ending, and the colors seem to just slightly reinforce that ... as if you are telling us... "It's coming... not just now... but... wait... wait..."

The poetry of this piece rocks Andreas. It is vibrant but with the tiniest tear in the poets eye.

Leaves. This is Mariahilferstraße, one of the busiest streets in Vienna. When the Underground line U3 was built, the old street car tracks in the middle were replaced by two lanes for cars, and the sidewalks were broadened. On both sides are now trees, some kind of fast growing and resilient acacia, but of course the constant traffic takes its toll. Leaves on some branches are already yellow and falling, while the rest of the trees is still green.

No, this is no indication of early autumn in Austria 🙂

Once again an ordinary item filled with splendor and color.... very nice work as usual my friend.