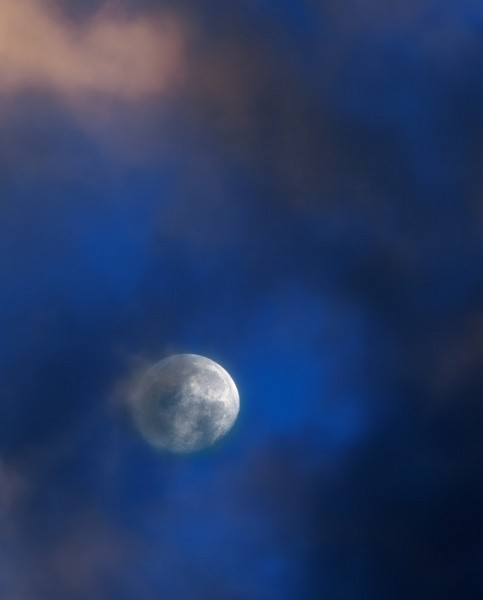 I shot this image in the morning, around sunrise. This is a relatively tight crop as my longest lens is the Nikon 18-200 at 200mm, and that’s what I used here. Post-processing in Photoshop involved pushing color and contrast without getting banding (even from RAW there are limits), applying a beauty blur on the sky, and sharpening the textured parts of the moon only. The result is quite OK and would suffice technically for a magazine sized print.

The Song of the Day is “The Moon Is Mine”, again by Fairground Attraction, the original band of Scottish song wonder Eddie Reader. It’s from their 1988 album “The First of a Million Kisses”, an album full of wonderful music, and on cover Elliott Erwitt’s famous image of the reflection in a car’s mirror of a couple kissing.

The original videos of many of the band’s hits (the album contained practically nothing but hits) are still to be seen on YouTube, not so this one, but instead we have a live performance on tour in Japan. And a good one it is 🙂

But this one is different. The blue color cast and the clouds make even a moon shot interesting...