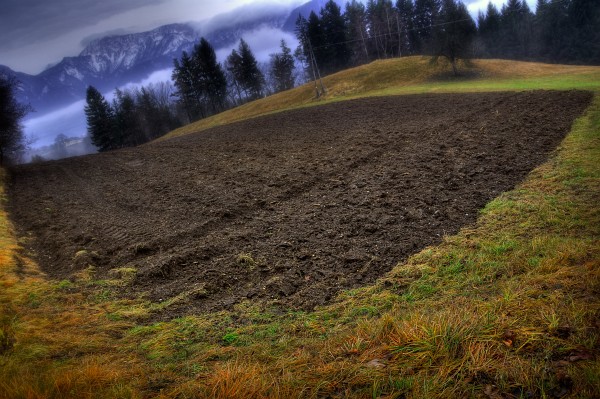 When I posted yesterday’s image, it was already 6am, thus I was not exactly hyper-active today. I processed two of the Firenze images and posted one of them on the Radiant Vista.

The first of the two, titled “Meanwhile Two Bridges Downstream”, must have been shot at about the same time as Ted’s first Ponte Vecchio image, maybe even some minutes earlier. I had positioned myself so that the sun just glimpsed over the roofs and then shot a bracketed burst of seven exposures from the tripod. From these I created an HDR image and tone mapped it with Photomatix Pro’s default settings. The result was of course horrible, but that’s not the point. I never use the output of Photomatix Pro as the final result. In this case I even combined it with one of the medium exposures, using the tone-mapped layer mostly for the sky and the normal exposure elsewhere. Photomatix has a setting to automatically correct water ripples, but, honestly, it does not work. The rest of the post-processing was complicated but conventional, basically a lot of more or less local adjustments.

The second image is from immediately afterwards, only now I faced west. The bridge where I stood had beautiful street lamps, and I used one of them as foreground, the church of San Frediano in the background. There is only negligible post-processing.

Unfortunately Firenze is a memory now and today was another unfriendly, wet day with fog, first low, but when that went away, above it was another layer of high fog, and the most of the sun that I saw all day was a milky disc around noon.

At 4pm I decided to finally tackle the problem of today’s image. I took the car and drove over to Wörther See, the most mundane of Carinthia’s many lakes, where in Reifnitz I shot this image of some landing stages. At that time it was already dark. The image is a 97 seconds exposure with the Nikon 18-200 at f14, 112mm and ISO 200.

The last image, the image of the Day, is another HDR image, this time only the tone-mapped layer and diverse contrast and color adjustments, a blur, some vignetting, etc.

Actually this was the first image that I shot today, shortly after 4pm. The idea was, to make a pleasing image of a drab, wet day. I knew there would be no good light, no colors, none of the ingredients that make photography so easy, only a bleak landscape that can’t decide if it’s late autumn or early winter. Consequently I was reduced to line and shape, and when I saw the shape of this field, I was hooked. I could have stopped and driven back at that moment, because I knew I had what I was looking for.

quite saturated colors you render here. still the color climate is cool, so the misty, rainy wet feeling is well transported.

Your style of using the wideangle lens is something I have to try myself. Up to now I was maybe a bit too conservative...

It really is a delight to see the difference in your vision and Ted's both of you have your own style and they are very different. Delightful...