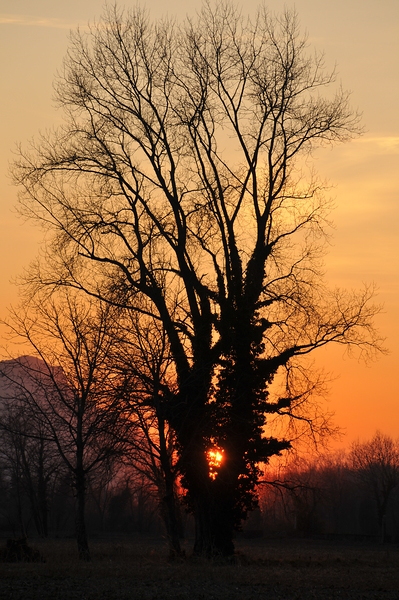 Tomorrow I have to get up early, thus I’ll keep this short. In the afternoon I made another trip down to Italy, just to find out that the shadow sides were white with frost. Still, it’s a much friendlier landscape than ours at the moment.

I was late as every day lately, and I lacked a real destination, but nevertheless it was nice to just drive around shoot an image here, an image there, until the sun went down.

The first two images were shot on a small road, well, road is almost a euphemism, along the river Ledra, approximately in the middle between Osoppo and San Daniele.

The last time I was there for the bridge, I had noticed that from where you drive up the highway, you have a fantastic view at the sundown. A deeply red sun had dipped below a very low horizon, because from that point and at that time of the year, the sun vanishes in the gap between two hills. The highway is the highest point there, and that had increased the effect. Of course you can’t stop on a highway, just to photograph the sundown, therefore I had missed the opportunity then.

Today I have stopped just before the driveway. I went some meters into the field, chose a tree to cover the direct sun and shot a series of images. The Image of the Day is what I liked best.

The Song of the Day is one more time from Paul Heaton. It’s “The World’s On Fire” from the 1987 Housemartins album “The People Who Grinned Themselves to Death”. Hear it on YouTube.

Very lovely how the tree catches the sun! Greetings