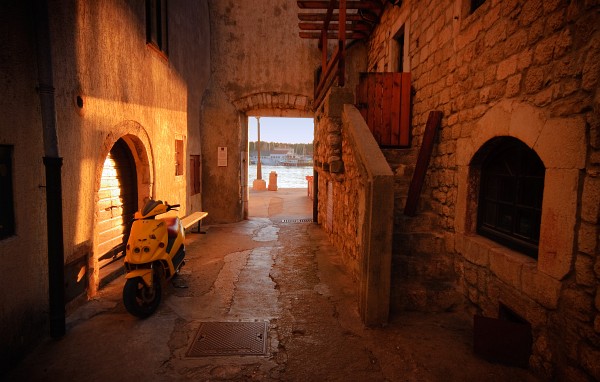 Well, these two weeks in Carinthia were quite a roller coaster ride. Up the mountains, down to the sea, deep snow, no snow at all, and this time it’s the sea again.

These are images of Monday. For various reasons it took me a while to get them processed, but now it’s done. It’s almost 3:30am though, tomorrow (well, technically today, but I’d still like to get a cap of sleep) I’ll have to work again, thus we’ll keep this short and sweet 🙂

Lots of new highways have been built in the last years. I remember, when I was a child, it took us 8 hours to get down to the Croatian isles, while Monday it were no more than 2:40 hours from Villach to the island of Krk.

Of all the Croatian islands, Krk is the most accessible, because it can be reached via a bridge from near Rijeka, and it is the most northern island in the Kvarner archipelago.

Incidentally this was my first “real” visit to Krk, though I had crossed it in July 2007 on my way home from Mali Losinj. The island is rather flat. I can’t find any exact information right now, but I honestly doubt that the highest point, the village Vrh (which means summit) is even 100 meters above sea level.

The first two images were taken in Punat, one of the biggest yacht harbors in the Adriatic, but otherwise not overly exciting. Opposite of Punat, in the middle of an almost circular bay, lies the small island of Košljun with its Franciscan monastery. As far as I know, it can be visited, but for lack of time I have not even tried.

The main town on Krk is called Krk as well. It has been a bishop’s see from at least the 6th century, it’s still partially walled, and the bishop’s palace is one of the biggest buildings. The image to the right is part of the town wall. 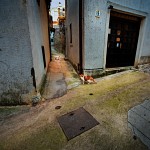 The town of Krk is really cat territory. Just sit down anywhere, and slowly but steadily one cat after the other will come and inspect you, beg for food or simply some affection. I can’t remember having seen so many of them in one place.

This image is particularly dear to me, because it needed a lot of affection as well, and after a good dose of post-processing, I guess it is quite OK. It was my first candidate for the Image of the Day, but finally the scooter won for its warm colors that so perfectly capture the feeling that I had, when I escaped from Carinthian frost to a sunny land by the sea, where it’s winter as well, but where the winter is 15 centigrades warmer 🙂

Of course warmth is relative. When the sun went down, I took some last images and then left. I could have stayed longer, but due to its orientation, Krk is not a very good place for a sundown. In fact, not even the “summit” Vrh is, because even there the sun vanishes in the mountains of the western island of Cres. The sky did some pretty things though.

When I crossed the border between Croatia and Slovenia, the temperature had fallen below freezing, and there was again snow.

The Song of the Day is “Southbound Again” from the 1978 self-titled Dire Straits album. Hear it on YouTube.

That’s it for today. Did I say something of “short and sweet”? Oh well! As for the images of today, I’ll try to catch up tomorrow. Have a good night.

I love how crisp all of these photos turned out. Those blues are soooo BLUE! =)