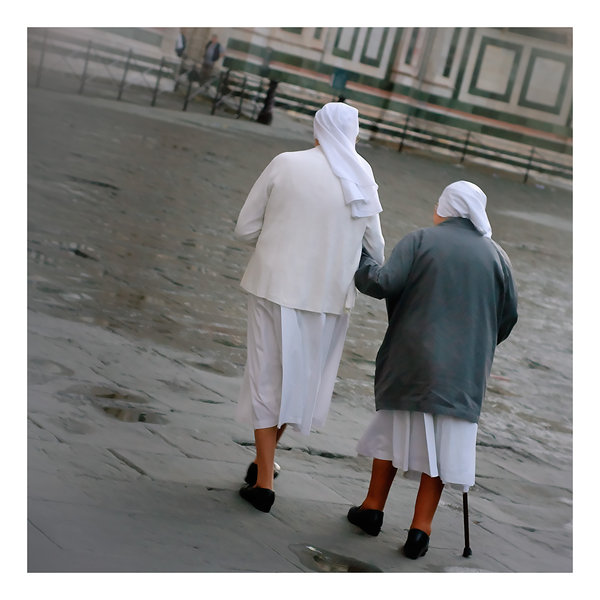 It simply had to happen. Today is the first day since November 21 that I have not shot a single image. Wet snow, a constant drizzle, fog below, clouds above, I don’t even feel bad about it 🙂

I spent a lot of time though, trying to get back into my bookmaking workflow, checking out Shutterfly (as recommended by Mark Hobson), trying to create a template, and so on and on and on. I guess you know how much time runs into those things, especially when you do them only once a year.

Basically this serves three purposes (“among my purposes are such diverse things as”): SoFoBoMo ‘09 is nearing, by then I want to have the process worked out, and this time I won’t stop at the PDF, this time I want to hold a book. #2 is that Mark Hobson recently teased everyone to make a real book, and #3 is of course that Ted constantly buggers me to finally make that god-damn bicycle book 🙂

Speaking of Ted, this is another image from that morning in fall 2007, when we met to shoot the sunrise at Firenze’s Duomo.

The Song of the Day, “Sisters Of Mercy” by Leonard Cohen, is part of the soundtrack of Robert Altman’s 1971 movie “McCabe & Mrs. Miller”. I am not sure if it was written for the soundtrack or not, but Cohen’s music greatly contributes to the overall atmosphere of this masterpiece. See a video on YouTube.

Great image today, Andreas, I think the use of square format is really nice here. I was surprised to see your reference to McCabe & Mrs. Miller, which is in my top 5 of all-time. Both the tale and the soundtrack..so good!

Definitely a working picture, and a matching title. The greys are wonderful, and the tilt for me adds that unexpected moment to it that makes the view stay, wander and center.
An the Cohen song is just great. Haven't heard it for probably 20 years but now have to order that CD immediately.

Lovely sisters! And yes, do the bycicle book🙂)
Sunny greets

I had to chime back in to agree with Markus on the tilt...the skew of it conveys a burden, a weight that rather compliments the subjects. Well done...