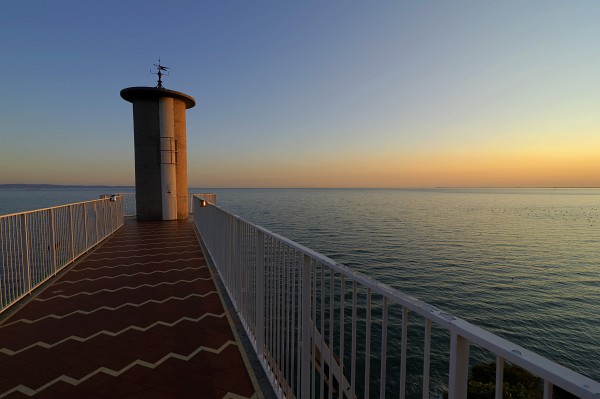 This trip to Italy was a test. The idea was, to find out if it’s viable to drive down to the sea, spend a day swimming, stay a night at a hotel, and return the next day, just in time for me to probably catch the train to Vienna. Thus, although we did it on a long weekend this time, we wanted to find out if it can be done on a normal weekend. The result is a resounding YES!

We stayed at the Hotel Riviera & Maximilian’s in Grignano, just north of castle Miramare, the sea residence of the ill-fated later Emperor Maximilian I of Mexico. See the hotel on the map.

The road along the coast runs high above the sea. From street level you see no more than the top of a medium sized early 20th century building, but below there are gardens, parking areas and, built into the steeply falling terrain, the actual hotel wings.

There are two ways to get down to the beach, maybe 50 meters below. The first is a tower with a lift, standing freely, connected with the hotel by a bridge.

The other one is a long flight of stairs, winding down to the base of the tower. The Image of the Day and the next image, as well as the sundown, were taken at the bridge and from the tower, the others on the stairs and down at the bottom.

I mostly used the Tokina 11-16 on this trip, and really, this is where it works very well. Of course it has quite substantial barrel distortion at 11mm, but PTLens got rid of that easily.

You’ll see more of it tomorrow, when I’ll try to wrap it up with some images taken at Miramare.

The Song of the Day is “Un’altra vita” by the great Italian composer and songwriter Franco Battiato. I first heard it in the version on Alice’s 1985 album “Gioielli Rubati”, but here it is from the master himself. Hear it on YouTube.

I have linked to an obscenely priced three CD “Platinum Collection”, because the collection that I have seems to be unavailable.

print it, hang it up! it´s fantastic!
have a nice week!