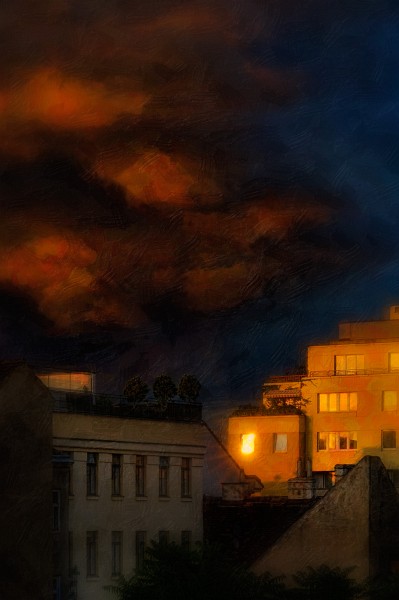 It was all over the Blogosphere, you know that 10,000 hours rule, popularized by Malcolm Gladwell, the rule that says that when you put 10,000 hours into something, you become a master at it.

Well, I guess I put at least two hours every day into taking photographs, processing them and blogging about it. Now figure: You’re listening to the words of a 20% photoblogging master! Isn’t that great :-?

But really, when blogging, you eventually get used to any kind of jubilee. For instance I remember “50 - A Small Jubilee” and “100 - Lazy Afternoon”, oh my, how big those numbers seemed. And then “500 - The Half Of It, Dearie”. That was really respectable, and this is exactly how I felt. But then, there is nothing like a #1000. I don’t know why, but even a 10.000 will not feel that magic. In fact, I have waited for this moment for months, have thought about how it would feel and it feels … swell 🙂

A thousand images, that’s more than two and a half years. When I think about that time, I definitely see progress. It’s not that every image is a little bit better than its predecessor, it’s not even that all those images are good, fact is, many of them are lousy, but the pure effort to produce at least one single good image a day, whatever the result is, makes sure you make progress. And I did, I can see it.

It’s not that I have developed an obvious style though. I have even tried to resist that temptation, the temptation to search myself a niche and try to defend it. I don’t have to, I don’t do it for the money.

When you have followed this blog for a while, you have seen many, many different approaches to photography and digital image processing. You saw me use LAB color mode for months, you saw quite some HDR images, one of the recent fads was the use of amber gradient maps for B&W images, now the dernier cri is the use of Alien Skin Snap Art for post-processing. If you don’t like it, rest assured, it will go away like all the others did.

And still, those things don’t just vanish. They contribute to my experience. Actually that was one of my initial motivations to start blogging: to keep me working, to keep me motivated, to keep me experimenting, all while trying to slowly build up a body of work. And now, after 1000 images, it has long become a part of my life. I guess it would be hard to stop it, and I have certainly no intention to do so.

Can I recommend blogging and especially this kind of routine? Certainly, I can. It’s a chore, it eats your time like a hungry, hungry monster, but it sure is an experience that I won’t like to miss. It’s one of those things that force you to make progress, that send you on a journey into the unknown, it’s one of those things that - probably - may make you eventually know what it is that you want to do. I sure don’t know now, but - after all - I am still only a 20% master photoblogger 🙂

Well, enough of that, and now for something completely different: my SoFoBoMo book. Only today I learned of a blog entry that Amy Sakurai has written about my book. Mine was one of the three books that she had looked forward to in this year’s SoFoBoMo, and seemingly I did disappoint her. I don’t know exactly yet what her gripes are, and even if I knew, I could do nothing about it, because the book is done. I could change it, but I won’t. I have it printed on my shelf and that’s it.

Still, I guess I could share some thoughts about why this book is what it is. Amy mentioned the small size of the verticals. Well, the basic layout, normally one image per spread, with a lot of white space around the images, was dictated by two things:

First, I wanted to make sure that nothing essential gets cut away in the printed version. I had used InDesign templates that someone had made for Blurb book sizes, and though I basically trusted the source, I was anxious to come near the borders. Thus the big amount of white space. In the end it turned out that all my worries were mute, the dimensions of the template and the printed book matched perfectly, but how could I have been sure?

The second thing is, that this year I wanted to make a printed book. Having to choose between Blurb’s different book sizes, I chose what I like to hold in my hands. Yes, really, this size, 8"x10” is a size of book that I have at home and that feels comfortable to hold, even for a longer time. See, I have another photobook with wonderful images by Magnum photographer Rene Burri. I absolutely adore his images, but … I can’t hold the book. It’s too darn big!

Same goes for a book by Henri Cartier Bresson. Wonderful book, incredible images, but I can’t hold it. My arms would immediately fall off, and because I can’t hold it, I don’t read it. Too bad, but that’s what it is.

OK, this explains the size and the format. Amy also mentioned “a subtle repetition of form, an unexpected sameness” of the images in my book. I’m not yet sure what exactly she means, I’ve asked and got no answer yet, but I guess it’s the repetitious use of horizontal compositions that consist of two halves, just like the title image. If so, well, that’s fully intentional. I strove for some visual coherence, a stylistic theme, that would hold the book together.

Actually this was a rather late decision. This kind of images was my first inspiration for the book, but while taking images, the focus changed to a more literal interpretation of the word “dreams”: Dreams of wealth, dreams of living with the luxury of balconies and roof terraces, material dreams if you will.

Those other images, those vertically split compositions, mostly of graffiti and stickers on sign posts, were introduced to contrast the material dreams. They represent the immaterial dreams of the underground of our urban society, and in the sequence of the book, they are meant as distanced, ironic comments. At least that’s what I think about it today.

While doing, I did not rationalize a concept for this book. In fact, this book was made wholly by instinct, and that’s another reason why I would not want to change it:

This book is the result and the document of a semi-conscious process, a process that I fully intended and that I found extremely pleasurable. It’s not that I refuse responsibility for it, to the contrary, but the process has finished and I would not like to change the documentar y. Does that make any sense?

The Song of the Day, “A Thousand Beautiful Things” from Annie Lennox’ 2003 album “Bare”, was originally selected simply for the word “Thousand” in the title, but interestingly enough, its lyrics describe a conscious view on the world, that I find very familiar, a view that in a way grew in me through my photographing and blogging experience. YouTube has a live video.

1000!! ??? Unbelievable... Congratulation my friend, feel embraced and present with 1000 kisses! I love your blog and hope you will never ever stop this wonderful and informative posts!!*pling* take the champagne🙂
sunny greetings as always

Congratulations! What a dedication you have, always striving for improvements and discoveries. Keep up the excellent work!

1000 posts and going stronger than ever - definitely a reason for congratulations! And I do definitely look forward for your next 1000 posts.

1000 posts and going stronger than ever - definitely a reason for congratulations! And I do definitely look forward for your next 1000 posts.

A very big congratulations on reaching the 1,000 mark and an even big thanks for demonstrating your persistence and the daily photographic posts.

Sometimes I aspire to a project of a photo-a-day bit deep down in my heart I know it won’t work, as many other things seem to get in the way.

I also enjoyed going through your book very much as you sowed me how the every day and ordinary can be interesting.

One of my favorites was the sails (page 98)

Niels, this was a good one. I read the comment and was completely flabbergasted. It did not make sense at all, but obviously was not SPAM either 🙂 YMMD

WOW ... many congratulations! Another accomplishment you didn't mention is that you encouraged and mentored people like me along the way. Thanks for 1000 posts and looking forward to the next 1000! Peace, Glen

A thousand pictures is certainly something. I was and still am always more than impressed by the standard at which you are able to keep your daily photos.

I can really imagine that it feels swell - even more so when you can look back and actually have enjoyed the journey.

Some time you should put together a book with the 42 most remarkable photos of those 1000. Just a a kind of retrospective exhibition for all of us... I would enjoy that!

Congrats again - and looking forward to the next kilo!

Congratulations, that is indeed a notable milestone on your photographic journey. The fact that you are able to maintain such a high level of excellence day after day continues to amaze and inspire me.

That's some kind of dedication!

Andreas, I have to say that I enjoyed your book. I do understand what you mean about letting it just happen, letting it flow and fit together, almost unconsciously. It is somewhat like using active imagination as a way of uncovering some of the hidden gems within.

I also used Blurb for my sofobomo book and am very pleased with it - well with them (two books). One is the small square (7x7) and the other is landscape (8x10). Like yourself, it is important to be able to hold them and get comfortable with them. Any bigger and it would be about my ego, not about the work.

One week late, but nevertheless, congratulations to your thousand post.

I have only followed your blog the late hundreds of posts, but they have usually always been well worth the time to read and view. Like the picture in this one, really interesting and like it's been painted; I must say I really loves it. Have you ever been painting, I get the impression you have?

Hope you find inspiration for another thousand great posts!

Thanks. No, I haven't been painting. I wanted to, but I did never get over the theory phase. But at least in theory I knew exactly how to prepare your canvas, how to grind your natural pigments and with what sorts of oil to mix them.

Years later I made the same mistake again: intending to prepare background for a role playing game, I ended up reading everything that I could find about ancient history from Mesopotamia up to the Crusades, specializing in the Byzantine Empire. I guess then I knew every date and had read some pretty arcane literature. Thankfully I skipped that phase when I got to photographing 😉

The image is made with Alien Skin Snap Art, a Photoshop plugin that converts photos into highly configurable painting-like images.

Overloaded with work, I've had to squirt time all over fires that were raging at my magazines so there was nothing left in the tank for much photography.

And that meant that I missed this milestone. DAMN!!!! Congrats Andreas... It is not so much that you have show the tenacity to create a thousand posts... nope... it's the quality of the posts Yeah, your work has grown... but imperceptibly because it began from such a high level.

Wonderful my friend... it's been a treat to follow along as you sparkled so consistently.