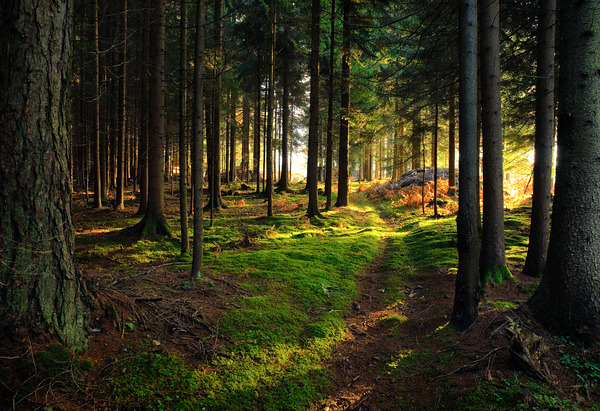 These are images of yesterday, Saturday. I took my time writing this post, because the weather forecast for today was pretty bad, and that made me suspicious I could need one of those images for today. Thankfully I didn’t, thus you get two takes on the old classic of the way leading into the center of the image.

The image with the bridge is an HDR image made with Essential HDR, one of my two HDR programs, Photomatix Pro being the other one. With HDR Darkroom there is now a third contender, again boasting superior tone-mapping algorithms. I can’t comment on HDR Darkroom so far, I’ve just bought it minutes ago 🙂

Why does he need three HDR programs, you ask? Well, they are quite cheap, at least Photomatix Pro and Essential HDR have distinct strengths and one time I like the output of the one, and for the next image I prefer the other. It’s about choices.

Anyway. I have a license now, I can already say that the current version has a bug, it always wants to run as administrator on Vista (and according to the forums on Windows 7 as well). Other than that I have just tried tone-mapping a single RAW file and the output was - garish 🙂

The Song of the Day is “So Many Ways” from the 1986 James debut album “Stutter”. See the video on YouTube.

I have to say that this forest photo is fantastic. Everything in it is just perfect. The light. The trees. The post processing is quite amazing as well. Great job, Andreas.

BTW, is the top image an HDR as well?

@Paul: thanks. No, the forest is not HDR. It's interesting: after I had finished the image, I had the feeling of having changed a lot, but when I compared the JPEG from the camera and my version, then it was not much more than greater detail and some minor shuffling in tonal values, plus some saturation. It's not the JPEG from the camera, but it is quite near.

never did a HDR myself. it's a interesting technic and i added it to my to-do list a long time ago. the way you use it, i like the best. (the more realistic view in stead of the surrealistic ones.) this image makes me want to be in Karinthie in this time of year. long walks through the woods. sun beaming and enlightening the path ahead of me. camera at hand and sure that will be the moment to proof the HDR technic myself. have a nice day, andreas 🙂

Emma, thanks. As to the forest, I just stopped the car in a random place. The forest did not even look promising there. I thought, heck, I may be lucky, and it turned out I was 🙂

lucky luck and experienced as you are, it turned out very well indeed 🙂

[...] Photomatix, it had some trouble with the moving elements and the fact this was shot handheld. As “Andreas wrote yesterday”, it’s about having [...]

I always love this silent places you find in the woods, lucky man🙂 sunny greetings

A magic image. I'm looking at it on my new led screen and it's beautiful!

It doesn't get more fairytale-alike than this, absolutely wonderful work with the shadows and colours.

This is just beautiful what a wonderful place !!