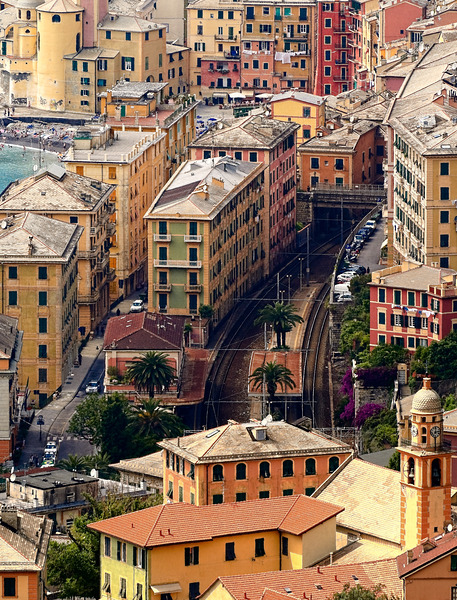 Today is Tuesday and I am almost a week behind. Sorry, can’t help it. At least I am forced by chance to stay one more week in Carinthia, which gives me more time for working on images, than I would have had in Vienna.

Wednesday last week was mostly about Camogli, a small town north of the peninsula of Portofino, but on the way there we made a short stop in Rapallo.

With a population of around 30,000, Rapallo is more than just a small tourist center consisting mostly of hotels and restaurants. It’s a place where real people live, who don’t work in the tourism industry. The day before I had seen some places where I wanted to photograph, but in the end it was just this one with the biker and the scooter that remained. I like the movement in this image, and how the different directions of the biker and the scooter take up the zig-zag of the street decoration.

After leaving Rapallo, we crossed the peninsula and made a short deviation to its highest peak. From there, using the Nikon 70-300 VR, I took some images of Camogli below. Here is one at 84 mm, before and after processing.

It’s really challenging to get anything out of these images. We have fairly long distances, atmospheric haze, due to the heat twisting and bending light in fancy ways, low contrast and a blue cast in the distance, so I guess it is not too bad what I got out of post-processing. It’s more an illustration than a real photograph, but at least it illustrates something 😄

The next image is from the same point of view, zoomed further in, and finally with the Image of the Day we are all way in at 300 mm, an effective focal length of 450 mm on my D300.

Camogli is really the most wonderful of places, a dreamland for any photographer. As you can see, it’s a narrow strip of beach, and then everything is built into the mountain. It takes quite some minutes down along the winding street, until you reach the lowest parking area. Most of the town consists of these long, high buildings, and in the center, the roads are narrow, many of them not accessible by cars, with the historic core a pedestrian area anyway.

The image of the little waterfall was taken down from a bridge between the area of the Hotel Cenobio dei Dogi, probably the most beautiful hotel that I’ve ever seen, and the old town.

The complex at the far end of the beach, as seen in this image on the left, that is the Cenobio dei Dogi. We didn’t stay there 🙂

Actually I think that Camogli is an excellent place to stay for some days. Only don’t expect to leave very often. This town has everything: hotels, restaurants, a medieval center, art, a fishing harbor (last image in this post), enough beach, and everything is integrated with the past.

This is not your typical tourist town, some remains of the past, surrounded by an uncontrolled sprawl of bad architecture. Camogli has character, and I guess this is mostly because there was is no space to extend, no way to build modern roads. They would have had to tear down the whole town. Thankfully they didn’t, and so we can still enjoy one of the most beautiful places in the world.

Whatever you associate with the magic words “Italian Riviera”, Camogli has it, and in all its splendor it is not posh. Sure, the Cenobio is pure luxury, but there are all sorts of price classes here, and everything is in walking distance from the beach.

It’s a big difference between Camogli and Portofino, the latter being a former fishing village, now an overpriced and snobbish assembly of designer shops. Dior, Armani, Zegna, Ferragamo, Gucci, all are there, and upon entrance to Portofino, you are greeted by several juweler’s shops. The big 50 m yachts of Portofino, they are missing in Camogli as well, but the one thing that Camogli has and Portofino has not, that’s life.

I spent about one and a half hours photographing in Camogli. First I went along the beach, down to the church, using nothing but the Sigma 8-16, most of the time at 8mm. Then I changed back to the Nikon 70-300 VR for some images of the cliff-like facades. I took them from the farthest point, near the church.

Finally I changed to my most favorite lens, the Tamron 17-50/2.8 VC. At this day I really needed all three lenses. Believe me, in Camogli you have a Manhattan problem. Granted, the buildings are not that high, but this is made up by how narrow everything is.

Take the image on the right, of the people walking in front of these buildings. OK, the foreground is obviously exaggerated, but the buildings in the back, it would do absolutely no good to cut them off at the top. This is what you feel, this is what it looks like when you’re there.

Same thing with the church. Of course when you see those things in reality, you may see only part of them at any time, but the way our mind works, we put everything together, create one impression that is made up of so many images. That’s where the 8 mm help. Actually Camogli was the first time at all, that I felt a need for 8 mm.

Camogli. I could have spent much more time in this town, days even, and I think I may return one day, but for that afternoon I was completely exhausted. It was a hot day under a glaring sun, and when I returned after those 90 minutes of concentrated photographing, I was glad to give up and have a drink.

The title of this post and of the Song of the Day, Gershwin’s “How Long Has This Been Going On?”, is inspired by the long time that it took me to come up with it.

What did I do? Well, I have made about 1200 images, many of them documentary, the greater part made with SoFoBoMo 2010 in mind, many variants, and wading through all that costs me time. That’s the reason. But don’t worry, I won’t build up another post like this one. I hope to catch up soon.

Ah, an old world town that does not suffer from the legacy of the 20th century and its 2 or 3 predominant architectural designs repeated endlessly. I'm so jealous of Europeans (and Asians). This hemisphere is just too new. It's a great blog post, by the way. A lot of photos and commentary is appropriate for the subject. They're great, even the highly processed ones. I'm liking the looks of the 70-300 too. The compression effect works more beautifully with these colourful buildings that it does with the dull monochrome of steel and glass skylines. At least, it works really well in *these* images.

Believe me, there are not many of them, even in Europe. Actually I am not against modern architecture, mixups of architectures, not even against bad architecture. Basically that's what this SoFoBoMo project is all about. But still, sometimes you see a marvel like Camogli and it fells real good 🙂 As to the images, thanks.