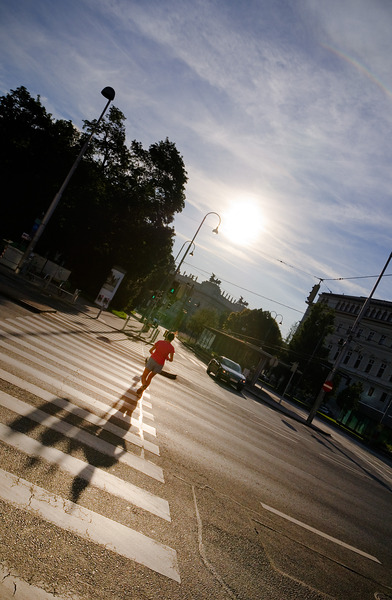 Today I left home very early, at least compared to my usual habits. It was about 6:15 am, and the sun stood at an angle that I went almost the whole way in shadows. The other thing is, it’s Friday, traveling day, thus I didn’t expect to have an image at all. This one just happened at the last crossing. I saw the runner take over, saw the blinding sun, and without looking through the viewfinder, while walking even, I took two exposures.

Of course with that much light, even at f8, the shutter speed was high enough to freeze any motion, and when I looked at the image, I really liked what I saw and decided to work on it.

Regarding SoFoBoMo, I really don’t know if I can do it within the remaining week. At the moment I suppose rather not, but this does not mean that I strictly rule it out. Let’s see.

The Song of the Day is “Runaway” from the 1999 “MTV Unplugged” album by The Corrs. Hear it on YouTube.

It's good to see your posts again, Andreas. This picture has a really interesting shadow. It looks like the runner's shadow stands still by the semaphore, with his hands on the hip. A sofobomo book in a week sounds like very late nights, that said if you don't have all images prepared already. 🙂

No, I've not, but I've had an epiphany: Basically I realized that I don't have to use images that match my exact topic only. It's not that I have to fill them up with context because I don't have enough of the "real thing", no, it's that the context is needed anyway. This will make making the book far easier 🙂