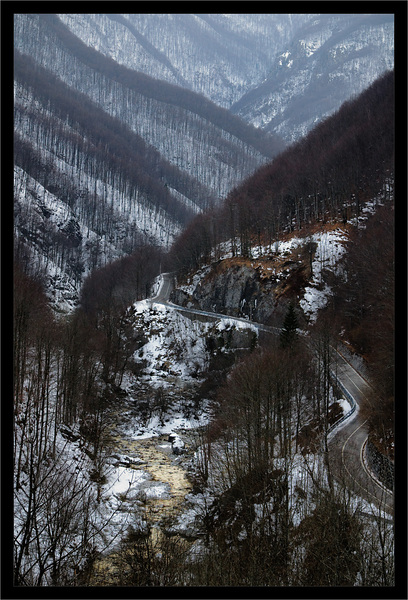 Yesterday was beautiful, so so we decided to drive to Italy and down to the sea.

What we couldn’t see from the satellite image though, was the strong haze. There were no clouds, but as soon as we got out of the last tunnel and into the plains of Friuli, it was clear, that I could forget blue skies at the sea.

Thus we reconsidered, left the highway at the exit Gemona - Osoppo, and instead took a mountain road via Tarcento and Uccea, into Slovenia, and then back to Italy, where we joined the highway again in Tarvisio.

It’s a small road between high mountains and there was still some snow left. Not exactly what we had been looking for when we set out, but hey, you’ve got to be flexible 😄

I’ve created a map on Google Maps. I haven’t done that in some time, but it is extremely easy, especially now that they have an algorithm to automatically follow roads.

The Song of the Day is “We Came Along This Road” from the 2001 Nick Cave & the Bad Seeds album “No More Shall We Part”. Hear a live version on YouTube.