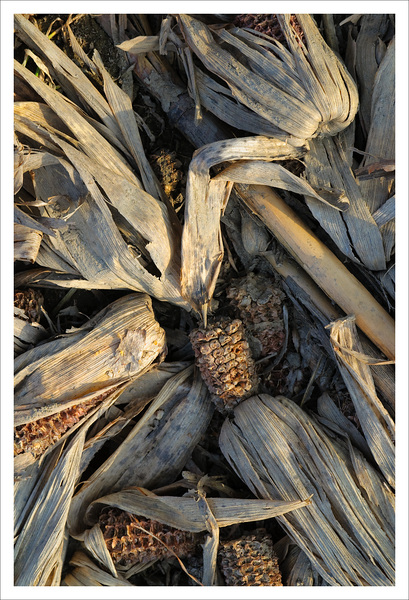 This could well have been another B&W image, but I think it works in color well enough. It’s the image for yesterday, Saturday, and while yesterday was a beautiful, though hazy day, today is cloudy and I will probably use one more of yesterday’s images for today.

Naturally I was very much under the impression of what happens in Japan, following the news as probably everyone who has access to news at all. Instead of any big photographic undertaking, instead of hunting the big, scenic picture, I just went out for some patterns typical of this time of the year. Earth, stones, bark, such things.

Here’s some remains of last year’s harvest, and that’s also how I arrived at the title. “Corn” as a search term did not yield any songs, “last year” gave me only Leonard Cohen’s “Last Year’s Man”, but of course “harvest” led me to Neil Young’s 1972 album, and “Out On The Weekend” didn’t seem too wrong.