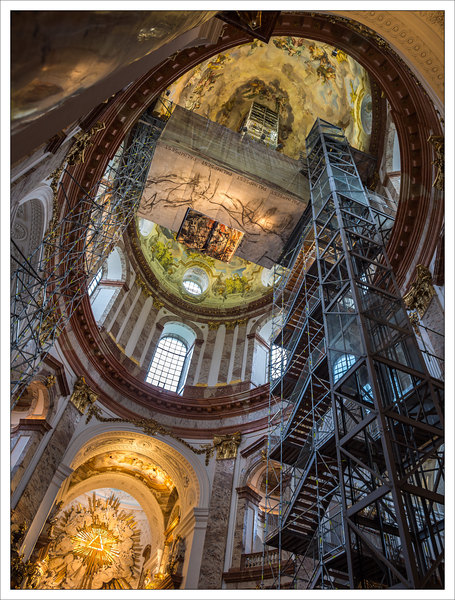 If you’re interested in photography, you have likely read the buzz about photographers who use images from Google Street View for their work, either directly of by photographing the screen showing the application. The PetaPixel blog had an article about the phenomenon, Mike “The Online Photographer” Johnston ran another, and always we see the discussions whether this is art or not. 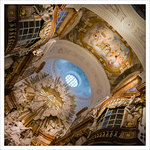 For all practical purposes this has been decided by the market, whatever we think about it, the consensus seems to be that, yes, it is art.

You may ask yourself why I mention that at all, but the answer is simply that it happened to me. I did the same thing, I enjoyed it and I can testify that it is definitely a creative act. This is the story of how it happened.

When you’re in a city and it’s raining, when there is no light worth recording, when everything tries to discourage you and you still don’t want to give up photographing, one of the many things that always work, is to go into a church and take some architectural images.

Churches are great for that, even if you are not religiously inclined at all. In the part of the world afflicted by Christianity it were churches, elsewhere it were temples, mosques, synagogues or other places of worship, but everywhere these are the buildings that were built most artfully. Castles and fortresses can be beautiful as well, but most often they are not. They are impressive and sometimes radiate power, but more often than not they are simply utilitarian and sometimes even plain ugly.

Not so churches, and that was the reason why I decided to visit a church that I had not seen in twenty years, Karlskirche in Vienna.

I was slightly taken aback when I had to pay 8 € just to get into the church, and when I asked what was included in that steep price, the answer was the museum, the church itself and the panorama lift. I shrugged, made sure that photography was permitted and paid the amount.

The Image of the Day shows the view that greeted me upon entering. For 8 € I got to see a construction site!!!

Shock and anger subsided immediately though, when I realized, that a lift went up to a platform suspended just below the cupola, and that from the platform stairs went further up into the lantern.

In the end I decided the money was well spent. Most people took the lift only to get up to the lantern and make iPhone images of each other in front of the rainy view over Vienna. I think on a sunny day it may even be an interesting panorama, but this day it left me completely cold. What I was after were the freshly renovated frescoes. 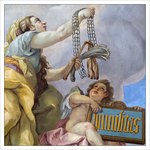 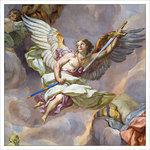 Using the 7-14 I made overall images of the four sides, and then I began, just like other photographers do in Street View images, to frame my own personal views of these paintings. That’s something you rarely get the chance to do. Normally it is impossible to come that close, and if so, for instance in a museum, taking photographs is frequently forbidden.

Now again, is this art? Can this be art? My only creative act was framing, but then, this is the most important and defining act in photography, and whether the scenery is real or part of the frescoes in a church’s cupola, why exactly should that make a difference?

Yes, I know, there is the matter of timing, the decisive moment and all that, but not all genres of photography depend on decisive moments. In landscape photography you frequently come to a place that you may never visit again, and whatever the light is, whatever the circumstances are, you try your best to get an image that you can be proud of. Does it count that I visited this church in the right year?

Whatever your opinion of the “art” question, it is still an interesting thing to do: to see what someone else’s eyes have seen, to see it through your own eyes, to view the details in your own way. Try it, you’ll probably agree: it is a creative process and you may enjoy it as well 🙂

The Song of the Day is “Someone Else’s Eyes” from Aretha Franklin’s 1991 album “What You See Is What You Sweat”. Hear it on YouTube.

This is the eternal question of "what is art?". What you did and what has been done with the Street-View images is without a doubt creative but I cannot bring myself to accepting it as art. Having said that I do accept that under the common understanding of what art is, many people would accept it as such. I have often wished for a new term that would separate what is commonly seen as art and those all-too-rare works which have given us paradigm shifts in how we view the world and ourselves. A huge portion of what passes off as art today is merely remakes of what others have done before, not just in terms of the works themselves but also of the ideas being presented. I guess in the end it's all semantics. It all comes down to personal interpretation and as such the discussion is perhaps of no practical importance.

What is it indeed? And how do we define it? By inclusion? By exclusion? If we know that something is art, how do we know that another thing is not? Vice versa? Is this strictly binary or is there a continuum? Can something be a little bit art? So many questions 😄

It is always up to the beholder.

Love that first "construction site" photo. And tho it's an interesting question, sometimes I don't think too much about it and consider what I'm doing as "documenting". Would you for instance call my photo at http://www.flickr.com/photos/wjlonien/7045539423/ art? I don't know, really. But the creativity isn't only about framing, it's also about the light, the moment, and everything - after all, the (part of the) statue I photographed there surely wasn't made inside of this church. So who created art? The original sculptor without any doubt, but what about the people who decided where to put that statue, how the light would fall onto it on certain days and times - or the photographer as well? I liked what I saw, so I took a picture of it. If that is art or not, others can decide; I won't care too much. Have a great new 2013!

Actually I would. You use part of a piece of art as your subject, but you give it a completely different context, you use it creatively, just like other photographers would use things naturally found. That your raw material was considered art in the beginning is totally inconsequential. In other words, if any of your work is art, there is no reason why this work should not be.