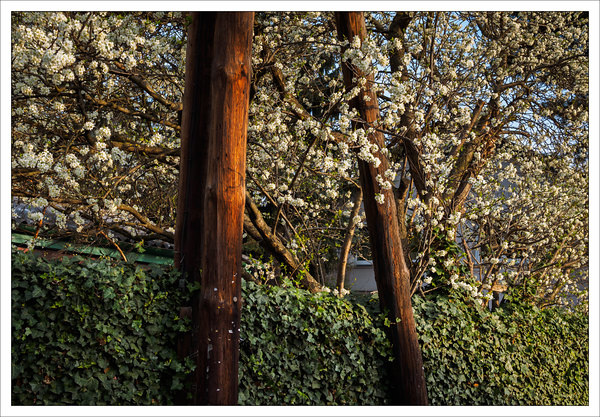 While Carinthia had a meter of Snow in February (and in some places it’s still around), Vienna didn’t have much snow at all this year. Still, even if the winter was not hard, there is something magic in the coming of Spring.

This is just a morning image without much of a subject. The image coming out of the camera completely failed to reproduce the warmth and radiance that I had seen and could remember, but I think putting it through careful post-processing I have come pretty near. By the way, this is Lightroom only. I can hardly use Photoshop any more 😄

The Song of the Day is “Spring is Here” by John Coltrane. Really, why not instrumental this year? Hear it on YouTube.

Nice image, and same here. I can't use Adobe products because they're not available for Linux, and even if they were I doubt that I would. Instead, I use the Olympus Viewer 3 on a small virtualized Win7 image just to keep Olympus' 'magic' colours, and do the rest with RawTherapee on Linux. Tho I have made camera profiles, it's still faster and better than to use RawTherapee alone (which I sometimes do if I want more 'correct' than 'beautiful' colours, and more DR).

Well, I come from a long Unix history. Utrix, Digital UNIX, AIX, HP-UX, SCO, Interactive, BSD and finally Linux. I always hated Windows and somehow admired MacOS, but found it too expensive. Today I see Linux getting bloated and constantly losing functionality. Gnome 1 with Sawfish ist still the best window manager I ever used. Since then virtal desktops have deteriorated. 12 years ago I used to have three virtual desktops with 6x5 viewports, [ctrl]-[alt]-LRUD mapped to move the viewport around the planar current desktop, [ctrl]-[alt]-[PU/PD] mapped to change "up"/"down" between Desktops. Normally I worked on the middle plane. From every non-corner viewport I had to use only one command to reach six neighboring viewports. Stability was great and I could keep such a session open for months without rebooting. Well, that was that. This desktop setup was made possible by the Gnome 1 pager, but obviously my setup was deemed so exotic, that no pager after that supported it. Today you have to feel lucky if proper planar navigation is supported, with plenty window managers giving you linear movement only. My photo hobby has pushed me to Windows, the whole industry being to blame, with Adobe being the worst culprit. I still run Windows 7 and I find it extremely stable (for a Windows) and, with "dexport" as virtual desktop, pretty usable as well. As my programming work has entirely shifted to portable languages, I can also easily work on Windows. It's OK. That leaves Mac OS X. I still can use my laptop, a 1.5 kg Sony Vaio Z21, upgraded to Windows 7 and 8GB. Every once in a while I look what the market offers, and at the moment I would like a laptop with 16GB, a 512 GB SSD, a display usable for critical photograhic work, and no more weight than my current device. Guess what, not only the cheapest, but also almost the only system on offer is a Macbook Pro 13" with retina display. At 1.6 kg it is only slightly above my weight limit and I would tolerate that. Crazy, huh? On the Windows side I see Windows 8 (almost as usable as Windows 7 if you invest a day), bad driver support (my Vaio's card reader was only supported on Vista/32!) and everything around my desired specs is at least as expensive as an Apple or simply not to be had. But then, my Vaio still works 😄

Well, I understand your points. But the missing Adobe products and the linear movements between desktops aside, I can even live with Gnome3 nowadays. At work (with Red Hat) it's still Gnome2, and who knows what the next stable Debian at home will bring (I think at the moment that would be XFCE or LXDE out of the box); I still prefer it to Windows. And yes, I also run a virtualized Win7, which is ok within Oracle's (formerly Sun's) VirtualBox. Still better than the Vista on my wife's notebook, which is far too much for its older hardware (Celeron and 2GB of RAM). I've tried Core's "AfterShot Pro" which was formerly Bibble Labs Pro, and it's not bad. If I need layers I still give it a try from time to time, but the free RawTherapee is far better IMHO. Other raw converters like Darktable are too much for my machine (which is a quad core with (GB of RAM), even with the relatively small raws from Olympus. But even here at IBM, only a handful of colleagues use our Red Hat based "Open Client" as a desktop - the majority knows only Windows. And a Mac? Well yes, nice - but I don't wanna move from one walled garden into the next... On our (virtual) server I now have the same stable Debian which I use at home - until a few weeks ago, it was still "Lenny" (Debian 5), which wasn't supported anymore since a while. So in regard to heartbleed and SSH concerns, I decided that we *had to* upgrade that one.

[…] 25mm lens from Olympus instead of my Panasonic/Leica one is Andreas Manessinger. See for example this post, and browse others from there as well. Impressive, to say the […]