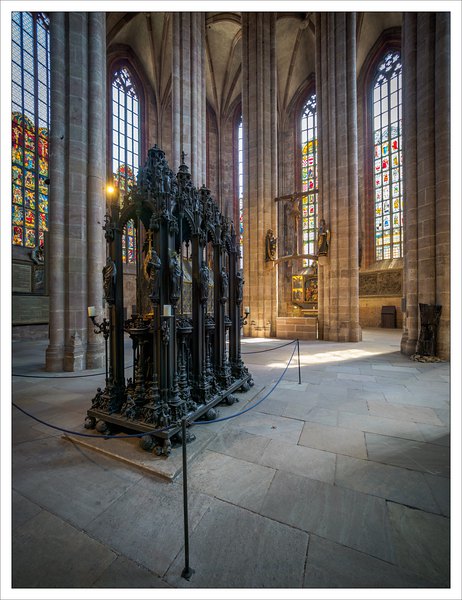 In mediaeval times, to own the relics of a saint, that meant to have a never-ending source of income.

Of course not all those bones and splinters of the Cross and shrouds of the Virgin are genuine. I think it’s safe to say hardly any are, and even then much questionable was actually questioned, but that didn’t change a thing. If people want to believe something, they believe it. Evidence is juxtaposed by “alternative facts”, and as long as proof is not overwhelming, it can go on almost forever.

Think of climate change. Yes, there are a few “scientists” at the fringes who deny it, but an overwhelming majority untiredly demonstrates in various ways and based on broadest data sets, that it is happening beyond doubt. The result? More people than ever doubt it. Not because they have reason to do so, just because they want to.

What you see here in the center of the main choir, that is the massive reliquary casket of Saint Sebaldus, for long Nuremberg’s most important source of income.