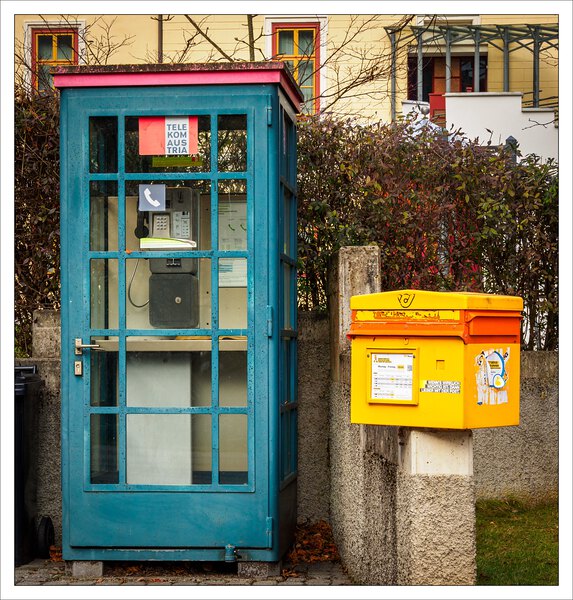 There are natural monopolies. Our capitalist society tends to privatize every state monopoly and to set on competition. All well, in many cases this is a good idea. In other cases (drinking water, public transport, postal services, breathing air, if it ever comes to that) it is likely not.

Here you see two symbols for what the Austrian Postal Service once was. A phone booth and a mailbox.

I don’t remember the exact history, don’t remember what eroded first, the telephone monopoly or the monopoly on letters and packages. Doesn’t matter, it happened all at pretty much the same time and I think completion of that process was one of the preconditions for joining the EU.

The Postal Service that I remember was a slow, bureaucratic and arrogant juggernaut. If you wanted a phone, you regularly had to wait for weeks, often months, in extreme cases years. Service was awful, they knew that you needed them and not vice versa. Adoption of new technologies was extremely slow. No competition, no pressure.

They also were a bank, and as such they had the advantage of better opening hours than regular banks. Other than that it was the same. Unfriendly, bad service, and if you could avoid them, you did.

On the other hand, the mail service was actually pretty good. You had one person to deal with. Normally it was a local resident and you knew each other. He knew where to leave packages if you were not at home.

Today you deal with a host of competing services. They are paid by the sender, you can’t choose them, and if you are unhappy with their quality of service, you can’t do anything about it. They don’t care about you. You are not their customer. You are just a delivery address. The feedback loop is broken.

In the telephone sector, the result of privatization and market fragmentation was extremely satisfying in the mobile arena, albeit by accident. Telekom Austria, today a private company, owns a third of the frequencies, T-Mobile another third, and the last third is owned by Hutchinson. A federal regulator makes sure that they all sell shares of their bandwidth to a host of second tier operators. The result is, that Austria has very low telephone fees. I pay 14 Euros per month for effectively unlimited telephony and 8 GB of data, with free voice roaming inside of the EU. Data roaming is free up to 6 GB. I never came to any limit, because once I am at home, work or in a hotel, I obviously use WiFi.

Landline internet is a different case. Like almost everywhere else the former monopolist owns all the cables and has no interest in changing to fibre. Fibre to the home is unthinkable, even in cases where it would be easily possible.

Obviously competition works fine in some cases like mobile voice and data. It does not necessarily work as well everywhere. In the US, mobile fees are obscene, and if you look at Germany, it is better, but not much better. But why?

I think that Austria has the fortunate situation of having privatized a monopoly exactly at the time when we joined the EU and at the same time when the technology got deployed at large. Had the lobbyists known how Austria’s regulation agency would act, they would have done everything to cripple it. Just look at what happened to the FCC under Trump. Basically Ajit Pai was installed as chairman to keep the FCC from doing its job - and that’s a job he did incredibly well. In the mobile sector, Austria by accident became the rare example of a consumer-friendly case of healthy competition.

It seems like state monopolies are not really necessary, but strict regulation is.

So what could a regulator do to fix the desperate situation in package delivery? Well, it could enforce cooperation on the last mile. It’s annoying having to get your packages from different shops, often only reachable by car, frequently all over town, just because different companies have different contracts.

A regulator could also watch over quality of service, and if a company does not meet its contractual requirements, it could even withdraw their license.

Sounds like a dream, huh? In reality, industries regulate themselves. In reality it’s a system of revolving doors. Someone like Ajit Pai wouldn’t be possible in any sane, non-corrupt system.