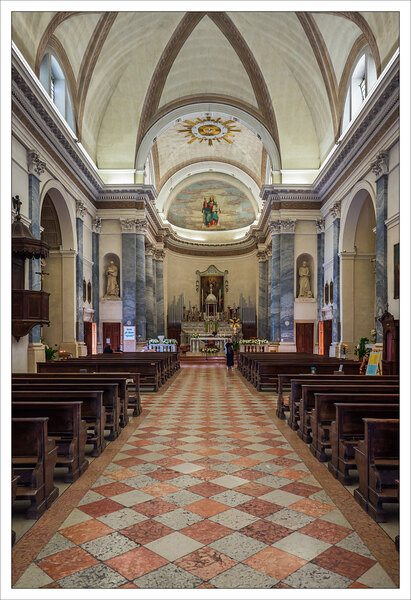 Lazise. This time we came by car, and this is the church we started with.

As I write this post, it is January 9, a Saturday evening. The storm of the Misguided on the Capitol lies three days past. Everything seems to have changed. Trump’s power is shattered, it is not even clear that he can last in his office for the remaining eleven days.

And yet, nothing is solved. President-elect Joe Biden has stressed, that these people were not protesters, they were domestic terrorists. He’s right by any legal definition, he is certainly right as regards the hard core of brutal thugs, who came with guns and bombs and batons, but it still won’t ring true in the ears of most of who were there.

Have you seen that viral video of Elizabeth from Knoxville, complaining about having been maced? It really sums up the problem facing the new government: those people are members of a cult. They are completely disconnected from reality, unreachable with facts, deeply buried in hate, unable to question their religion. In their version of reality, they are the righteous defenders of the constitution.

It is also clear how this came to be. Trump’s idiotic strategy of lying his way to a quarter billion war chest was supported by the greater part of the GOP, and they very well knew that he had no claim at all, that he just had lost. It was all a big charade, created to let the donations flow.

It is understandable that the old grifter reached for the money, because he’ll have to pay down 400 million dollars next year, an amount he likely can’t pay without selling most of his assets, unable to continue keeping the facade of being a successful billionaire.

It is much less clear why the party followed suit. Yes, part of the donations goes to the party as well, but they should have known, and I’m sure they did, that feeding lies to the people is no sustainable business model. At one point in time they will call the bluff, and then? If you raise expectations to ever higher heights, only to lead the flock off the cliff, what can you expect? Trump will just run with the money, but what’s a party expected to do?

It’s a problem on both sides of the aisle. Trump’s followers have long been estranged from the democratic party, where many of them had a home, then, long ago, when capitalism had not yet gone on to richer pastures, leaving their homelands devastated, themselves out of proper work. These people may just stop voting, but they may as well lend themselves to be bundled up like bad bonds, bundled up by whoever is Trump’s heir.

It is no less of a problem for the GOP. They will have to decide what they want to be. Being Trump’s party is no way into the future, not the least because Trump reigns by whim, not by knowledge and strategy. In the end it’s always all for the worse. His handling of the pandemic is the best example.

Also look at China: his hate for everything chinese is grounded in the fact that the pandemic indeed came from China, and that China handled it in a much better way than most nations in the world. Sure, they are a dictatorship, but their ability to build hospitals in two weeks and to test a million people over a weekend is breathtaking.

Trump hated it. It came at the wrong time. He had dedicated 2020 to his apotheosis, but suddenly it all began to derail. He had no plan. He never has plans, he has gut feelings. His gut told him, somehow this had a connection with China, and so he blamed it on China.

The next thing that happened was, that a crowd of TikTok teens fooled him into believing his Tulsa rally would draw a million followers. A few days later, the crusade against TikTok began. He conjured up a threat due to the fact that TikTok is chinese owned, but that was always ridiculous. After all, when all your computer chips and most of your network equipment are built in China, a teenage app should be your least concern. It never was about logic though.

Being Trump’s party will secure Trump’s misguided followers for the GOP, but it will cost too much in the center. It will only suck the party deeper into the death spiral.

The alternative? A realistic Republican party would have to cleanse itself, get rid of the dirt and the lies, and if they go that way, Trump’s followers are as out of reach for them as they are for the Democrats. It may still be a viable alternative though. They would lose Trump’s lot to the non-voters, but the American desire for equilibrium could save them. If they honestly cut the ties with Trump and his lies, if they begin to value truth again, if they become believable and trustable again, rooted in reality, they may recover in one or two cycles.

I would bet my money on stupidity though.