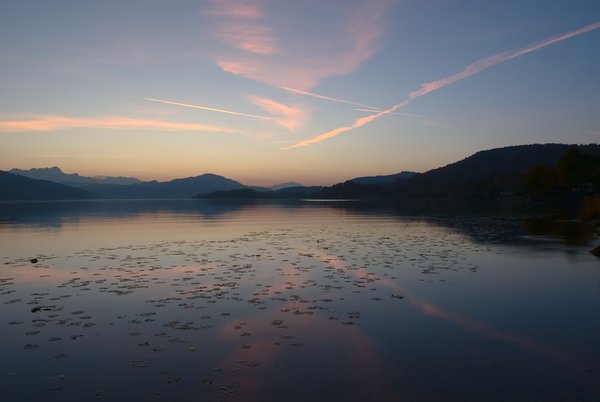 Grr … the first time in days that I had the IOTD post ready before midnight, and just as I tried to submit, Blogger.com had a scheduled outage. It does pay that I copy texts to an editor before trying to post. Here it is:

145 images for today. Not shabby, even if all of them are variations of maybe 20 or 30 motives. It began in the morning when I drove up Dobratsch again, today arriving in time for the beginning of civil twilight. The sky was less dramatic than on Sunday but good enough. I’ll try it one more time on Saturday, and this time I’ll be there even earlier, as I want to go up further for some new perspectives.

It’s funny: I was not alone. During the hour of concentrated shooting I glimpsed another photographer, shooting the sunrise as well. When I finally decided the major drama was over and I could afford a break, I was alone again. I had not seen hin coming, I had not seen him go.

On my way down I reshot an image from Sunday that had an unfortunate merger between some leaves in the foreground and a group of trees in the background. I love it when I can come back.

The time around noon and the early afternoon was filled with Photoshop work and sleeping, before I left at 16:45 for Sundown on Wörthersee. Wörthersee is the best known lake in Carinthia (and there are many), but it is also mostly private property and you can only get to the shore in public baths (closed at this time of the year) and a couple of promenades. I decided for “Friedlsteg” on the northern shore between Klagenfurt and Krumpendorf. Not much foreground interest, but one of the best places for watching the sundown.

It was as tough job to decide about today’s Image of the Day. Finally a sundown image made it for the delicate red traces in sky and water.