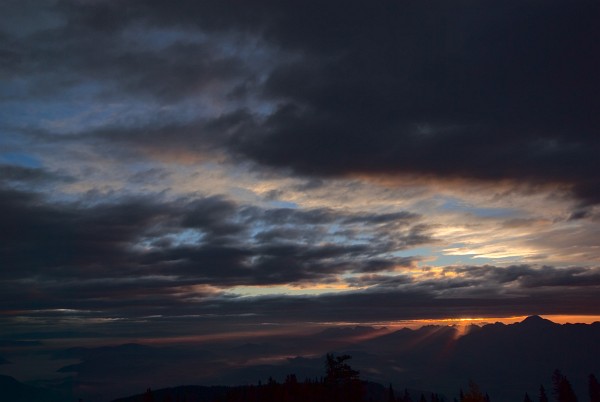 Did I say anything about being addicted? I’ve been on Dobratsch again, this time an hour earlier, well, at least according to the clock, as we changed last night from daylight saving time to standard time. I had camera and lenses in my new Lowepro SlingShot 200 AW, which is absolutely execllent. I shall buy another one for Vienna.

It was rather cloudy and at first I thought I would see nothing spectacular at all. I should be proved wrong quite dramatically! There are several good shots in this series, but this one captures the most magic moment, when rays of orange light streamed down the mountains like fire. I tried to change to the Nikon 18-200 to get a teleshot, but to no avail. The moment lasted maybe 30 seconds and that was it. You really have to click the image to see bigger versions.

Technically the image was rather complicated to postprocess in Photoshop as I had to drastically compress the dynamic range. The result holds all details in the highlights, sacrifices some contrast in the middle and rescues substantial detail in the shadows. I used Lab mode and about 10 curves layers, some with masks, some with blending options.