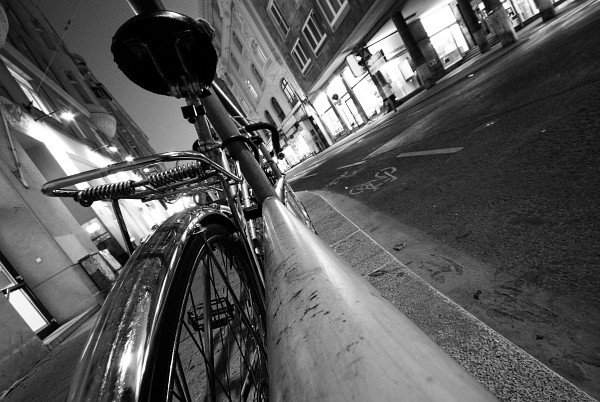 I had three short sessions today, one on my way to work, one at noon in a park with attached playground and one on my way home. I think I’m getting the hang of this ultra-wide business now.

Basically you can use these lenses for three purposes:

(1) is the straight-forward and somewhat naïve approach, (2) is the orthodox way and (3) can be interesting, creative or plain rubbish, whatever applies.

This is the first B&W image here. I shot the image on my way home, the sky was not yet fully dark, the street lights had this strong orange tinge, and although orange vs blue makes for nice color depth, the color version did not work. The orange was too muddy brown, the blue too dark, thus I decided for high contrast B&W.

Technically this is the image with Photoshop’s automatic white balance, a color mixer of mostly green and blue applied, a levels adjustment layer for darkening the midtones and two curves for modelling contrast. No masks involved. Sharpening at the end.

Of course one curves layer would have sufficed, but this is my way of working. I prefer small changes, one step after the other, sometimes going back and adapting one of the curves, sometimes toning the effect of a layer down with the opacity slider, sometimes using masks or blending options to restrict the effect to certain areas.

I had no tripod, thus I rested the camera on the railing directly behind the bicycle and hoped that I could hold it steady for 2.5 seconds. A side effect of the way I held the camera was, that I could not see through the viewfinder. It took me five or six exposures to get what I was up to, mostly because I wanted some lines to finish themselves exactly in the corners.

And for the effort, you created a masterpiece. It's hard to imagine that you are so new to ultra-wides. Soon, I suspect, you will make this lens your "normal" way of looking at the world.