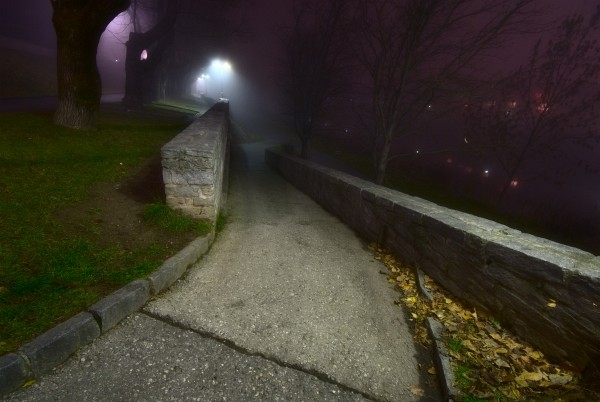 Today I had to tend to our cat. He has a broken leg and I had to bring him to the doctor. Therefore I had no time for photographing until the evening. At that time I decided to drive to Villach and make some pictures at the center of the town, near the river, a place called “Draupromenade”, named after the river “Drau”.

I spent about an hour there, exclusively with the Sigma 10-20. White balance was set manually, either to one of the presets or to a certain color temperature. I don’t know how other cameras would fare, but at least the D200 cannot be trusted at these conditions, though I guess that unless a camera has a dedicated white balance sensor like the D2X has, not much can be expected. No problem, that’s but a click in Camera RAW.

Overall I was very satisfied with the results. I should get a remote control though. It makes self-portraits so much easier, and in some of the darker places, with only 30s maximum exposure time, I had to open up to f8 to get enough light.

Another interesting thing is, that I have become much more aware to the need for subject management. Quite automatically I scan the field for litter to be removed, etc, a thing I would not even have considered earlier. Routine is a fine thing. It makes our jobs so much easier.