58 - At the End of an Unexpected Path 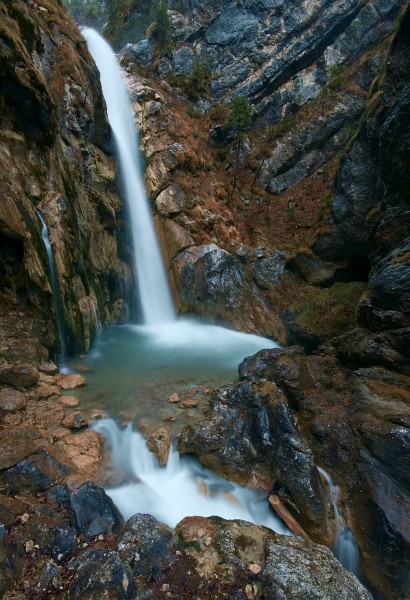 Today I left at 14:30, originally intending to do some twilight photography in Villach, probably again down by the river, but when I saw the sky clear up, I decided to head for Klagenfurt, probably Magdalensberg for a sundown. I did not take the straight route via Köttmannsdorf, but instead took the street down along the river Drau, with the option to get a view up to Hollenburg from the south.

When I reached the roundabout near Ferlach, I suddenly knew what I wanted: Tschaukofall, a waterfall at B91 south to Loibl Pass, the mountain road to Slovenia. The waterfall is at the right side of the street, just after the junction with the road from Windisch Bleiberg, but you can’t see it from the street.

When I got there, I had the unpleasant surprise of finding the entrance to the canyon closed. Somewhat disappointed I drove along to the next parking area, and there was an unexpected footpath into the forest, winding up the slope and back, probably to the waterfall. There were signs all around, naming all the plants, and below each sign there was something like “To the memory of Dr. Peter Tschauko”. I strongly supposed that a path having his name written all over it, could not possibly lead anywhere else but to the waterfall named after him.

I was right. The path was wet, slippery, but well built, so it was not exactly dangerous. After about 20 minutes, two photos included, I reached the waterfall. According to the mainstream of information on the internet it has a height of 26 meters (another source says 17, whatsoever), not terribly high, but it looks impressive nevertheless. There I took some photos, all with the Sigma 10-20, this one probably the best. Exposure time is 9 seconds at f16, therefore the smooth, silky look of the water.

It had rained all day and everything was dripping. Sometimes it is very reassuring to know that your camera is weather sealed. Goodness, I like this Nikon D200!