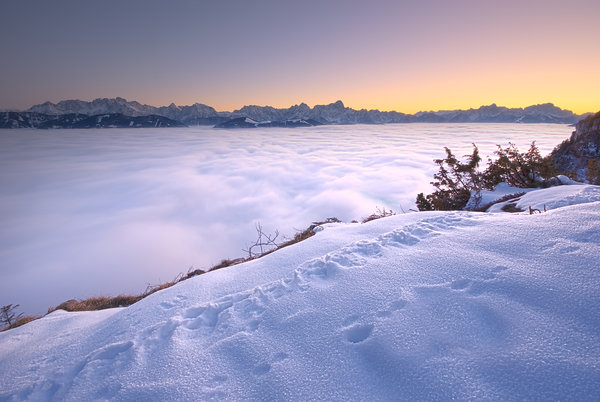 It’s 3:40 in the morning now, I’m back at Vienna and should have slept for hours. Instead I prepare HDR images and hang around in the Radiant Vista forums. Oh well!

We had a strange day in Carinthia. Clear, but only because we were way under the fog. This is much, much better than being in the fog layer, but I still had the urge to see some sun. That meant Dobratsch again, my sunrise mountain, being used for sunsets lately as well. Obviously I was not the only one with a need for sun, because while I drove up, I saw a steady row of cars come down. The whole of Villach must have been up there. Amazing!

I was late as always, thus when I was high enough to be out of the fog (this time it needed approximately 1400 meters), I decided to not drive up all the way, but to watch sunset from one of the more spectacular viewpoints, the one called “Rote Wand” (red cliff). This is where during the earthquake of 1348 the mountain broke apart most spectacularly.

I was a little annoyed at first, because when I came there, the viewing platform was closed but obstructed my view, it was full of people, many children as well, thus I didn’t want to climb over the fences. Well, of course I did when after sundown suddenly all children were gone 🙂

This image was made out of a 7-shot bracketing using Photoshop’s merge to HDR, with different layers created by converting to 16 bit in different ways, and merging the layers by blending modes and masks. Quite complicated work, so complicated in fact, that I kept the Photoshop file.

This image stuns on so many levels. My favorite is the soupy marshmallow which invites me to dive into the froth. It is one of my favorite of your images, and that says very much.