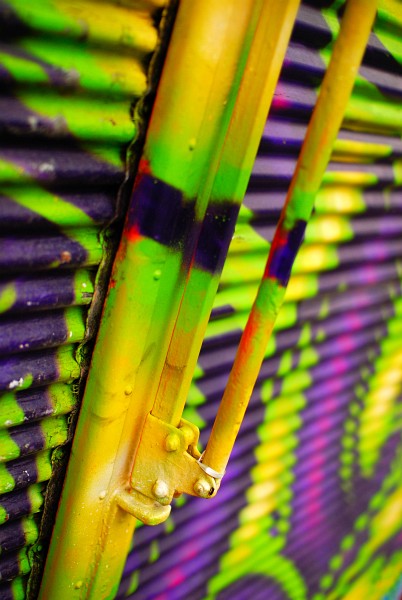 I have uploaded five images to Smugmug today, I’ll call this a successful day. All of them were shot with my beloved Sigma 30/1.4 and auto ISO, most of them I did prepare with Capture NX. More and more I like this program. It’s easy, you get your results very fast, and it really plays well with Nikon RAW files. I can heartily recommend it.

This is the shutter of a bicycle shop in Westbahnstraße between Schottenfeldgasse and Zieglergasse. It’s over and over full of graffiti, seemingly not due to an act of vandalism, but endorsed by the owner. Isn’t a little color sweet in winter?

There is another shop that I could avoid so far: one of the photo retailers in Westbahnstraße has the Nikon 50/1.8 AF in its window. I admit that it lures me just some time now. Many people complain that the normal lenses of the past are now short teles, at least on Nikons, and that they see no use for such a focal length.

To me it is fairly clear that I would use such a lens not only as a portrait lens, but also in a very similar way as the Lensbaby and the 30/1.4: to isolate details when I don’t want the blur and the 30/1.4 is too wide.

Anyway, I could resist so far. Tomorrow I’ll try to put the Sigma 150/2.8 macro to use on the street. If that does not work, maybe I’ll approach the macro aspect as soon as I am in Carinthia tomorrow night. We’ll see.

I guess I won’t be able to resist the 50mm lens forever, but for the time being I still have some toys that are under-exercised. And there is of course the 50/1.4 as well. It’s much more expensive and not a bargain at all, but it is even faster and many people prefer its bokeh to that of the 50/1.8. Oh well, questions over questions 🙂