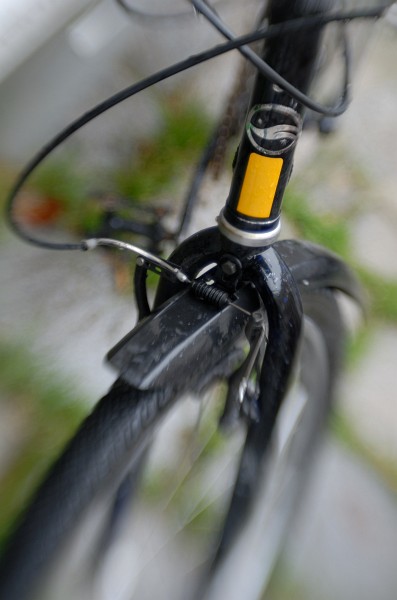 We had hideous weather today. Snow and rain, always toggling between the two. Well, it was to be expected, but I can’t really say I like it 🙂

It is much worse in Carinthia, though. I have just heard that they had 40 cm snow this day. Interesting. On Sunday I have shot primroses in our garden.

This morning, on my way to work, I tried for some minutes to go with the camera around my neck, but although the D200 is weather-sealed, the 50/1.8 is not, so I put it away. That left me with the job to hunt for an image at noon.

When I did so, I changed to the Lensbaby. It looks more like it could take some water, and, more important, it is better suited for picking out details, and what else cold anyone want to shoot in that weather? It took me 200 meters and 10 minutes to find this particular bicycle, I knew I had what I wanted, and, much against my usual habit, I immediately returned to work.

I was a bit in a hurry on Sunday, because I had to catch the train to Vienna. In a perfect world I would have liked to do kind of a review and connect at least some images with major events that had happened at that very day, or probably even at the exact time when the image had been taken.

Writing an email answering Ted Byrne’s comment to “100 - Lazy Afternoon”, I had the idea that probably I should take this up from now on. What about a story of the day? Some URL to a news item, an article, anything that has impressed me at that time?

Looking at the headlines in “CNN”, “The New York Times”, “The Guardian”, “El Pais”, “Der Standard” and “ORF” gives me the impression, though, that today is not the right day to begin with. It seems nothing decisive has happened today. The Israeli president seems to have a big, big problem, and a “Strike plunges Lebanon into chaos”. Ahh, there you have it!

Frightening isn’t it? I often thank for the undeserved luck of having been born where I have been born, having been able to go to the university and bide my time with shooting images and writing blogs.

I have a tiny, niggling, problem with a detail of this image. I mean this is reeeeeeely 'control freaky' but still...
If you would just bring your right frame to the left until that tiny wire up in the North East corner exited right into the corner... the composition would be MASTERFUL. As it is... it is merely wonderful.

Mmm ... gettin' a bit lazy, aye? Actually, I tried it now and I tried it then, then finally giving up on it, hoping to get away 🙂

The troublesome thing is, what the Lensbaby does to the corners and how it feathers the details. But you're right and I just did what I normally don't do with Images of the Day, I've replaced the image.