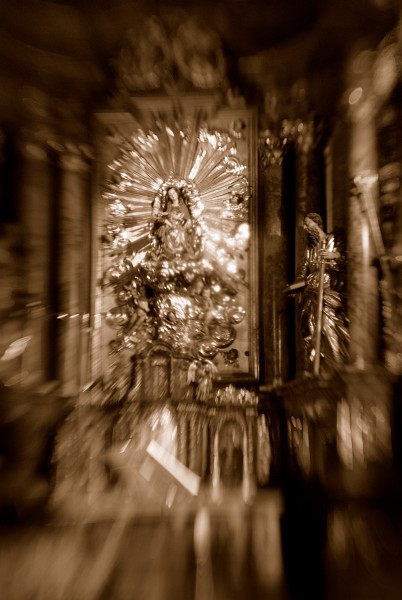 This time we were there for a concert. Again the Trigonale festival, and today The Hilliard Ensemble sang Guillaume De Machaut’s “Messe de Notre Dame”, one of the best known masterpieces of the 14th century Ars Nova, a music style that readily used the new possibilities of musical notation. For the first time it was possible to write down rhythm. At the same time this is the earliest surviving example of a full mass where we know the composer.

Hearing Ars Nova may be an interesting experience for the uninitiated, because this is not about musical harmony. It’s serial music and similar techniques can be found 600 years later in our Minimal Music, e.g. in the works of Steve Reich and Terry Riley.

As this mass is too short to fill a whole concert evening, they interspersed the parts with motets also by Machaut. For sound samples see here, but neither the samples of the mass nor those of the motets can give a real impression of this music. 14th century composers simply did not yet see the need to show off within the first 30 seconds 🙂

Thank Goodness, in contrast to the 1993 record that I’ve linked to, they have changed their Latin from French style to German/English style. I really can’t stand French style Latin. It always sounds like a bad parody on homosexuals.

You expected a Song of the Day? Well, take any track of these two CDs, and why not the Gloria?

Very unique and mysterious. I really love how creative you are. The metalic like tone is awesome.

Actually the image had quite nice colors, and colors were why I took it in the first place. The Lensbaby successfully smudged away some foreground detail that I wanted to deemphasize, but unfortunately it was so bright, that it still stuck out in color. B&W took care of that, and the toning looked appropriate for an old church 🙂

I really LOVE this! Please post it at the RV community forum? This is a great Lensbaby image, just made for that subject. I love the sepia, too, as it seems to register "ancient" and "old" when I look at it.