306 - The Rock That Would Never Falter 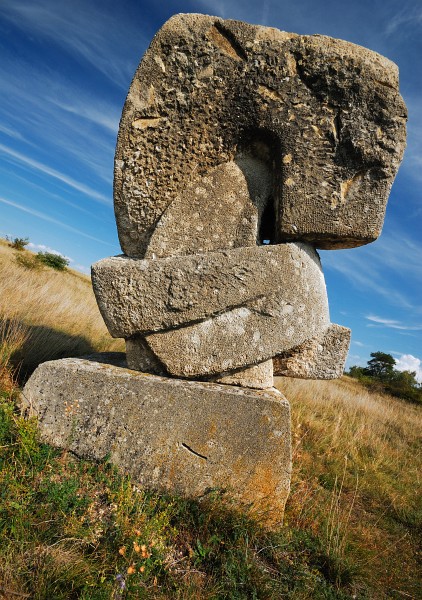 Austria is a catholic land and today we had a public holiday. I used it for a trip to Burgenland, where in the quarry of Sankt Margarethen, one of the biggest and oldest in Europe, every summer an opera festival takes place. This year they show Verdi’s “Nabucco”, yesterday evening I saw it, and I was utterly impressed. It’s a fantastic production and more than worth seeing.

But that’s not the only thing to see in Sankt Margarethen. The quarry is used by sculptors and their works are liberally scattered all over the place. This is one of those sculptures on a hill a little east of the quarry and overlooking Burgenland’s big lake Neusiedler See.

Nick Cave has given us four Songs of the Day so far, and today we have another one: “Rock Of Gibraltar”, a love song with a twist, from his 2003 album “Nocturama”.

Are there any relics of the people's of Austria before Christianity? Are there any antecedents in those ancient, what Celtic? relics to the great architecture of the Catholic period? This sculpture looks somewhat lke the relics of the Machu Pichu, or the strange Irish carvings. It even has an oriental feel.

Not very much. Christianity has done a great job :/

Basically you find those things on the fringes of Europe, but not in the center. Another explanation is, that in Austria wood was the main building material, and wood does not survive as easily 🙂