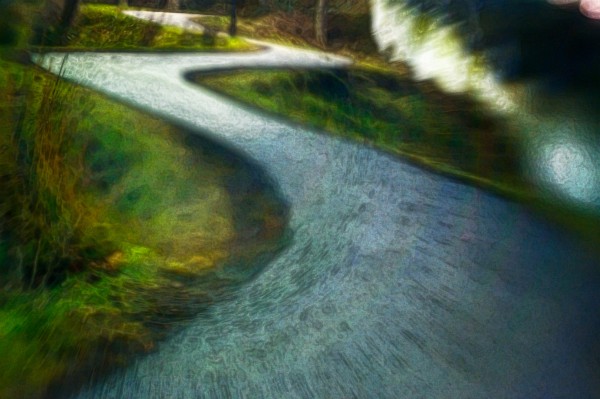 This is the image of yesterday, Monday. I’m treading a bit on Bill Birch's turf here. The image was shot at night and again with the Lensbaby. What the camera saw is pretty noisy, and worse, it’s flat and not terribly sharp. Hey, have you ever tried focusing a Lensbaby at f2.0 in darkness while bending it? Good luck!

What I did in post-processing, was a variant of the technique for inventing detail that I’ve recently described, only this time I used two layers with edges, a rough one derived from the “Glowing Edges” filter and the usual one from “Find Edges”. The rough one is applied in “Soft Light”, the fine one in “Multiply” mode, both with reduced opacity, and there is a blur involved as well.

I’m writing this as I’m on the train, on my way from Vienna to Carinthia. I carry one last image for the show with me, along with more paper for matting. Tomorrow evening I need to hang the images, so there is still much to do and I’m incredibly tired. Hmm … I guess I won’t work till late, but instead rise very early 🙂

The Song of the Day is of course “The Long And Winding Road” from the 1970 Beatles album “Let It Be”. You know it anyway, but hear it on YouTube.

That shot leaves ambivalent feelings. I reallly like the grainy, unsharp, watery picture and the road the winds towards the light.

But I'm always annoyed by that bright flare on the right hand side. It makes me kind of slip while enjoying the rest of the photo - it's so distracting.

I like it, especially the color treatment. The lensbaby is so handy in its application (you have tilt, shift, swing, and rise in your pocket... don't get that from just any lens🙂 that I have deliberated about buying one for some time. I have a more cumbersome setup to do these things with a dslr, but its not very simple to setup or use in the field.