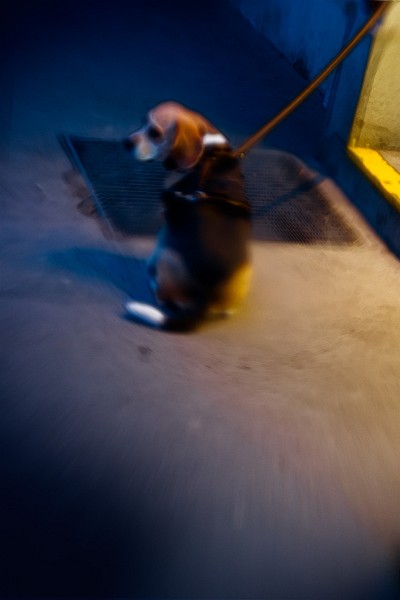 Today’s image is technically quite the same as yesterday’s. Small wonder, I processed them in the same session on the train. Again the image was shot with the Lensbaby, and this time I have used two images from a series of eight. In the morning I saw this dog waiting in front of a bakery. He was so cute and at the same time seemed so helpless, I simply had to take some images. Finally none of them was particularly good, thus I combined two of them with different areas of relative sharpness, and then I did the edge finding game again, once more with two layers, one of them for rough contours, one for texture.

The Song of the Day is “How Come My Dog Don’t Bark When You Come Around” from Dr. John’s 1992 album “Goin’ Back to New Orleans”. Hear it sung live on YouTube. Nice performance.

The Good Thing: I go to sleep now. The Bad Thing: I have to get up in less than three hours. Oh my!

Anway, late congratulations to facing that challenge! Hope you let us know how it goes... I'll certainly keep my finger crossed.

That's an interesting photo, the (non-)sharpness of the dog definately underlines his (her?) loneliness. Hm, well...being a beagle might also have helped.