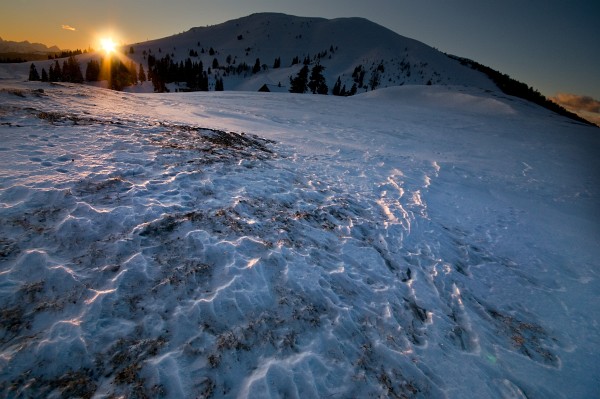 What was I thinking of? Yes, I had a lot of probably usable images on Thursday, but this is supposed to be a daily photoblog, right? I should have simply taken one of them and been done with it. No, instead I held up the queue, searching for the “best” image. Of course you don’t know what’s best, as long as you don’t have post-processed all of them. Well, if I had continued to process all candidates, you’d still be waiting. This morning image, taken with the Nikon 18-200 VR at f13 and 1/50s was the first candidate. I already had taken some shots, when finally the fog rose from the valley. Moments later we were shrouded.

This image and the Image of the Day were both taken at sundown on the mountain Dobratsch. I have been quite often up there last year, but this year it was the first time. I was really there for the eastern sundown, for the soft, gentle gradient, but how the sun vanished, that really had its charm 🙂

Both images were taken with the Sigma 10-20 at 10mm and f11. I shot these images hand-held, later for some HDR images I changed to the tripod.

The Song of the Day, as a memorial to my stupidity, is the Bruce Cockburn composition “Waiting For A Miracle”, interpreted by the Jerry Garcia Band on their 1991 live album.