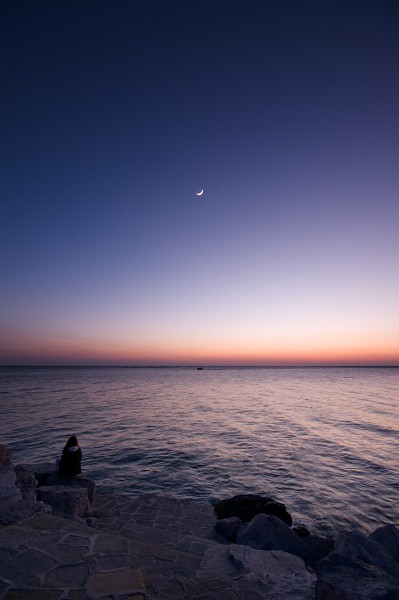 Every once in a while I feel a strong desire to drive down to the sea, either to Croatia or to Italy. Yesterday it had to be Italy. The first image, right out of the camera, was shot in the small yacht harbor Grignano, a short way north of Trieste, right after Miramare. I used the Sigma 70/2.8 Macro at f2.8.

The next image was also shot with the Sigma 70/2.8 Macro, this time at f4, and about 10km to the north, in Sistiana, another yacht harbor. On Sundays all of Trieste and Monfalcone are out at the sea, thus it was rather crowded. That’s really the time, when fast telephoto lenses shine. I walked around and shot details, lots of details. and the crowds didn’t bother me at all.

Next comes another image from Sistiana. This place is really only a bunch of piers with boats and some bars 🙂

We finished our trip in Duino, a small village with a large castle, made famous by the Austrian poet Rainer Maria Rilke.

In Duino I changed to the Sigma 10-20. For this image and for the Image of the Day I used f11 and shot from the tripod. This is the harbor of Duino, with the unpretentious but excellent restaurant “Dama Bianca” in the back. Hmm … just the right time for some sweet twilight shots, but then, don’t boats move? They do, and this is one more lesson learned 🙂

The Image of the Day is from only minutes after sundown. There were no spectacular clouds, only a nice gradient and the moon. I was lucky, because the girl sat there, completely motionless, and only seconds after this shot, she stood up and walked away.

The Song of the Day is “The Sea Calls” from the fabulous Richard Hawley’s 2007 album “Lady’s Bridge”.

One last thing: there will be an important announcement today, Monday 11. Be sure to check back, it’s an amazing thing. See you this night!