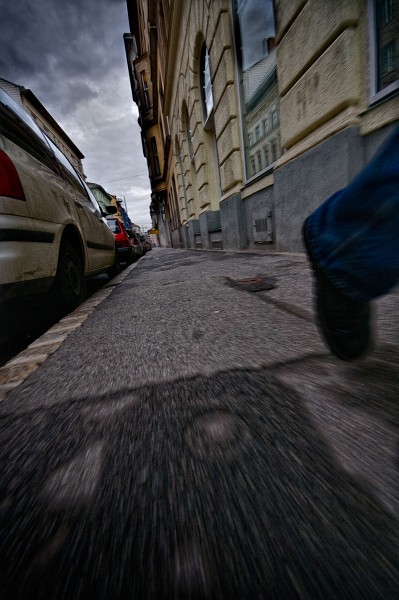 Yesterday morning I found Niels Henriksen’s blog entry “Photo Creativity Experiment - A Walking Stick Camera”. Niels describes how he used his monopod and a remote shutter release to get a very low view point. He let the camera dangle down to his feet or knees and remotely triggered it, without looking through the viewfinder, only approximately pointing in the right direction.

Hmm … I’ve bought a monopod last summer, even though I have never really used it, I have a cable release, thus I decided to give it a try. I used low perspectives as well as very high, and I really would like to know what people thought when they saw me 🙂

The lowdown? Success rates are not stellar, not at all. Be prepared to try the same shot more than once. Set your camera to continuous mode and always fire bursts, slowly moving the camera left and right, up and down, changing the angle. You really have to work hard to get a certain perspective. A Zigview with its remote option would help greatly.

Is it fun? You bet! This image was shot while walking and continuously shooting backwards. Probably the most random way to take a photograph, short of camera tossing 🙂

The Song of the Day is “Down Here Below” from Steve Earle’s 2007 album “Washington Square Serenade”. Fellow blogger Bill Birtch, photographer and Photoshop artist extraordinaire, used a song from this album on his blog. Thanks Bill.

See a live performance of this song on YouTube.

Your analogy about the success rate with camera tossing is very good.

I like how we can learn form each other as I didn't think of using it facing backwards. Novel idea.

Good image. I like how the dark shadow near foot creates mystery for me.

Cool image and I love this idea. I just bought a Gorilla Pod and can now picture myself, camera mounted on at ground level or even the back of my wheelchair, remote shutter release in hand snapping images from viewpoints I'd never imagined possible. Now if it would just stop snowing and warm up a bit, I'd be all set. Thanks for sharing this one Andreas.

I'm sure that's a lot of fun! I have to try this one day, when I have a monopod.

I like the "speed" of the asphalt in the foreground and the deep view down the street.

I wonder how much the photo was cropped? The composition looks rather planned - luck or plan or both?

And, yeah, I guess people will remember you...🙂

No crop at all, no cloning, no nothing. Well, apart from those contrast and color enhancements 🙂

Okay... if an image is random... izzit art? Suppose I shipped a camera inside of a package with a tiny hole and a random shutter tripper. When I retrieved the package and brought the images into Bridge... could I, without cropping or enhancement display any of them as.. mine? If not mine, whose?

The results of camera tossing still assume that "place" was chosen by the "artist" so there's still some subjective component of the final image. Add in time and I suppose the act of choosing one out of a burst of images all add up to an artistic communication. Or do they?

Yeah, this is a fascinating image. But am I the one who creates art when the image is random? And what is then your role?

The more you go random, the more you have to rely on automatic repetition and numbers.

It's clear, your extreme of the camera shipped randomly around, randomly triggered, taking completely random images, would produce pictures that you could hardly claim as your's, and the art portion of the whole act would shift into the performance itself, i.e. what could be considered art and in fact would so, albeit only by a tiny minority, is the act of packing a camera into a box, randomly shipping it, retrieving the images and claiming it art. That's a tad self-referential, but contemporary art is frequently like that.

In my case things were comparably controlled, not much was random here. I wanted an image like that, I have checked in between, have made corrections to the way I held the monopod, and I stopped doing so when I had a sufficient result. Technically that's not much different from trying the same shot again because you've not been able to hold it at a low shutter speed.

Just to make sure, this is not an excuse. In fact I think the idea with the randomly shipped camera is great and I would love to try it, it is only not very practical. Nevertheless, I would maybe not exactly claim the images mine, but I would sure claim the act my art.

I don't care by what means you acquired these results... As long as no one was injured 🙂

Great image. I love it. Lots of dynamics going on here. Part of it is no doubt perspective induced, but another part is just plain cool, no matter how you look at it.

Thanks partly to your inspiration, I've had a little experiment with this idea myself! I'm pretty happy with the results and I'm looking forward to trying it on some interesting subjects 🙂

Thanks for the idea!