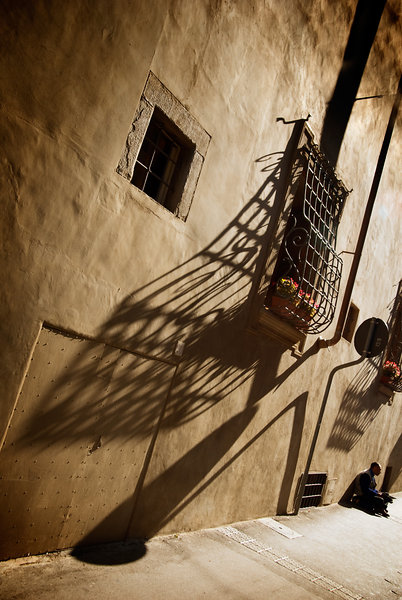 and then for almost the whole time on the train I saw the most spectacular weather outside. Fantastic light, dramatic skies, I could have taken hundreds of images, and instead I sat there, sub-par images loaded in Photoshop, trying to ride dead horses. Goodness, that’s tough!

Fortunately I have a folder titled TODO on my hard drive, and there I found this image that I always had wanted to work upon and that I never actually had. It’s from my trip to Florence, Italy, where I met Ted Byrne.

Back to the Image of the Day. There is always the question of whether it is ethically acceptable to show images of beggars or not, but this is not an image about a beggar, It is about the shadow of power looming over the outcast, it is about being a stranger in a world that does not welcome you, it is about being outside, about being rejected as “The Other”, but as an old song says: sooner or later we are the others, or in Italian, “tanto prima o poi gli altri siamo noi”.

Umberto Tozzi is well known for his poetic lyrics, but it is much well known that Giancarlo Bigazzi, with whom he had a long collaboration from the mid-seventies up to the 1991 release “Gli altri siamo noi”, was a driving artistic force. About this song Bigazzi later said that Tozzi had written neither a single line nor note. They ended up in court, and such is human nature, that this is neither uncommon for long-standing artistic collaborations nor for friendships or marriages.

Anyway. The lyrics to this song are quite challenging in the Italian original, and although there is an English version of the song, it is very much different, thus I’ll try it with Irene’s translation to German, translated to English by me:

I have never been lonelier than this,
but at night I wish it would be Monday soon,
to go out with the others and paint the town.
With the others, trapped in themselves, the others
who open up in the sun like the flowers that dress
when they wake up, when they go out, when they go away,
when they arrive.
We are like those shrouded angels,
the eyes in their faces like mirrors,
because the others are us.

Walls tumble under the breath of an idea,
Allah or Jesus, in a church or a mosque,
We are the others, but here on this same way,
like cowardly heroes, we leave behind what connects us
to those who wait and ask themselves why they were born
and suddenly die.
Maybe they are swallows, leaves from Africa,
who smile at us in melancholy,
and all of us are victims and hangmen,
sooner or later we are the others.

In this world we are the others.

We stay in comfortable deserts
of apartments and tranquility,
far away of the others,
but sooner or later we are the others.

In this now so small world
we are the others.

We are the others
between Indios and Hindus,
between youths in drugstores who don’t carry on,
Working class families, forced on vacation by robots,
gypsies from the east in ghettos on the outskirts.
All of us are victims and hangmen,
sooner or later we are the others.

Bigazzi, Tozzi or what, I find this quite impressive, don’t you? See the video on YouTube.

I'm not that much of a fan for lyrics - I guess I'm too much artistically challenged. But the photo certainly speaks for itself - you've really nailed it. The positioning of the person just to the right side of the photo makes that feeling of "shadow looming from above and crushing" even more haunting.

That was great. Both the image and the lyrics. They really do compliment one another quite well. Outstanding work, as always.