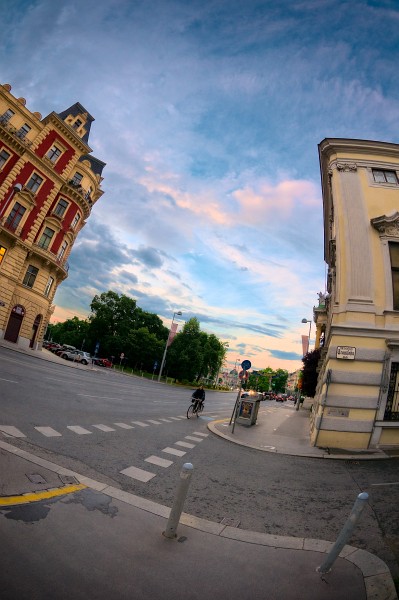 I had some other nice images yesterday, and I was already willing to throw this one away. I had shot it at 8:11pm, when I just had left work. The image was badly lit, with a nice sky, but overall way too blue. It had some comic-like look, charming in a way, but still, I had already deleted it when I finally decided to take it back, load it in Photoshop and see if it has any potential. 14 layers later the Image of the Day is what I got. I like it 🙂

The Song of the Day is “Let There Be More Light” from the 1969 Pink Floyd album “A Saucerful of Secrets”. Hear it on YouTube.

The greatest problem with the wides and superwides is the way they shove things farther apart and emphasize the space between. Wide angle shots can be more about the spaces between life than life itself. Here's a great example...

I've got mixed emotions about the effect. Personally wides have taught me to be aware the cracks in an illusion I'm trying to build. And I reflexively fill them up. BUT, you know what? Maybe there's a whole new message to pull out of those between-things. But wait, thats the point... the 'things' can't be in the spaces right?

I like this a lot, it's amazing the difference between the images. It looks properly 'balanced'.

What layers did you add to bring back the orangey colour in the high clouds at the horizon?

@Ted: Yes, the spaces! In hindsight I should have waited till the cyclist came nearer, but alas, at that moment I was primarily fascinated by the sky.

@Rick: This is mainly a two layer blend with masks, a cool version for the sky and a very warm version for everything else. Then I have further modeled the colors in Lab mode with a "Man from Mars" in the sky.