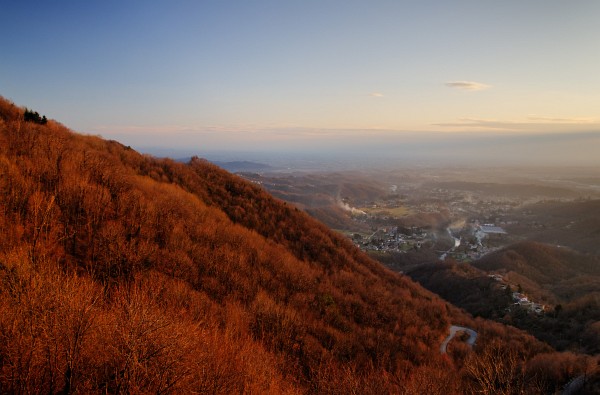 Yesterday we had light snow, high fog, above that clouds, and according to the weather report, there was no single sunny place in Carinthia.

There is always relief though. My home in Villach is about 20km from the border to Italy, less than 100km from the Friulian plain, and that’s about 400 meters below. But the 400 meters are not the only thing. Beyond the plain there is also the sea.

From the moment you get out of the mountains, into the plain, there is nothing between you and the sea, nothing that could hold back the calming influence that it has on the weather.

In some years I have seen snow even down there, but from the trip to Savudrija I knew that this year there is none. At home I studied the map on maps.google.com, looking for a place that would have sun for a long time. A slope facing west would be ideal, and I identified a small mountain road south of Gemona, from Artegna via Montenars, Capovilla, Frattins, Flaipano and finally Stella.

The first two images were shot on the plain, looking north, north-west, the other three around the free-standing bell tower, the campanile, of Stella, at a place overlooking the Friulian plain, beside the cemetery, above the few houses of the village.

I have not shot many images in between, because the road is narrow and there are not many places with a view and an opportunity to park the car. Nevertheless, it was a revelation. This road is incredibly beautiful, and I really look forward to driving it again in summer, driving all the way under one big green roof.

Even the timing was perfect. I arrived at the campanile of Stella just to get the last red sunlight. Only ten minutes later it would have been too late.

It’s interesting, Villach is not far from where I lived before, but it is that decisive few kilometers that suddenly bring so many countries in reach, not physically, no, physically they were in reach all the time, it’s mentally that they are in reach now.

Yesterday I left Villach shortly after noon, drove down to Friuli, just to see some landscape without snow and have a good sunset, and as you will see soon, today I did something similar, but that’s really stuff for the next entry.

The Song of the Day is “In Another Land” from the 1967 Rolling Stones album “Their Satanic Majesties Request”. Hear it on Deezer.

Great photos! I'm envious of the variety of landscapes you have "nearby". The photo with the small river/brook and mountains beyond was expecially nice, a bit of sky and mountains caught in the reflection.