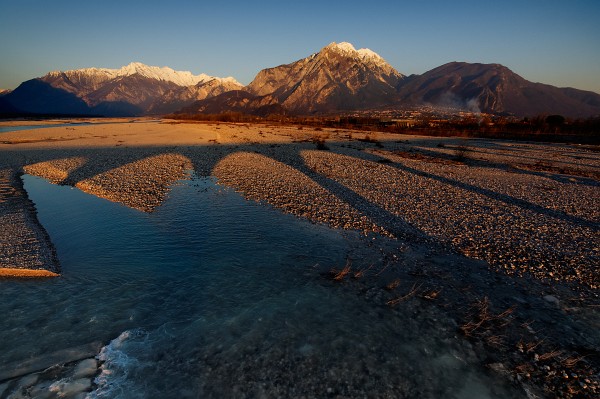 Have you ever driven 100km in one direction, just for a sundown? Well, yesterday I did 🙂

More and more often I rely on Google Maps for scouting photo locations. Sure, it does not give you the full picture, height information is missing, but if you are aproximately familiar with the environment, it’s a fantastic way to find out how to get somewhere, because it will show you small roads that might even be missing from your maps.

In case of yesterday’s trip, from sight I knew that east of where the highway A23 crosses the river Tagliamento for the second time (counted from the North), there is another bridge over the river, and that was the place where I wanted to go. I intended to leave Villach at 2:15pm, but for various reasons I couldn’t leave before 2:45.

Thanks to Google Maps I knew exactly where to go, and from the moment I left the highway at the exit Gemona/Osoppo at 3:30, it took me no more than ten minutes to get to the bridge, just in time for the sundown.

Basically I was there for an image looking east, over the river and to the gourgeous peaks of the Julian Alps. I had not expected to be able to get down to the river bed, and when I found out that there is indeed a way down, it was already too late. Anyway, that’s for next time.

The bridge was narrow with two lanes and not much space for a photographer to stand, making changing lenses a rather awkward experience. I did it anyway, one more time using my Lowepro Slingshot (this time the 200) like a tray, dangling in front of me. It’s a funny feeling juggling lenses over an abyss, but you get used to it 🙂

I often read that those super zooms like my 18-200 (or Paul Lester’s new Tamron 18-270 VC) are derided by prime snobs, and although I like to use primes a lot, while traveling I mostly stick to the 18-200, just because you never know what you need, and when you don’t travel alone, permanently changing lenses makes your company even more nervous than the permanent stops do anyway.

Apart from that, both lenses, the Nikon 18-200 VR and the Sigma 10-20, are supported by DxO Optics Pro in combination with the D200 and D300, thus I get lens correction as well, not only of distortion, but also of CA and vignetting. Pretty nice, if you ask me. OK, in post-processing I put the vignette in again, normally much more so than there was in the first place, but there’s nothing better than a clean start.

I concluded with some images into the sundown, and only half an hour after having arrived, I made my way back to Villach. A tad crazy the whole story, but absolutely satisfying 🙂

The Song of the Day, “Look Down Off A Bridge”, is from Jay Leonhart’s 1983 album “Salamander Pie”, a CD that has become famous because a German HiFi magazine used it as reference CD in their tests of high-end audio equipment during the early 1990s.

Indeed the CD is not only exceedingly well recorded, it is also a fine example of very relaxed bar jazz. Wonderful music to listen to, sipping on a glass of whiskey, but even without the whiskey it’s very nice 🙂

CD Baby has not only sound samples, they even let you hear the whole song, and at the moment they have the CD in stock.

That photo of the bridge shadow and the water and the mountains is certainly worth even a long drive - impressive!

The hint about Google Maps is interesting. I have been using a local (Finnish) map service for trekking, which is detailed enough. I checked with Google some of my recent places, and it seems that the detail level varies a lot. In some places, it is excellent, but in a neighboring area there may be much more coarse data.

always fabulous!!!!!!! Your images are always a joy to see such vibrant images

While the lead image is very dynamic, I like the 2nd even more: The rhythm of the bridge and the counter-rhythm of the waterbody draw my eyes.

I wish you a happy new year!

Nice images... but the bag. Hmmm... I understand that there's a compulsion to find ways to carry EVERYTHING WE CAN POSSIBLY IMAGINE WE WILL EVER NEED! After all, maybe there will be a spontaneous need for a 2-7000mm f 1.0 zoom with all of the corresponding filters and lens shades. Meantime you never know if you'll immediately need a -200 mm negative wide angle along with the cleaning materials for it. And of course you really ought to be able to carry dishes and silverware sufficient to have lunch while deciding among which of seven prime lenses best meet the need of the moment. And... and...

Obviously you have an orthopod on retainer, along with a physical therapist and medical masseuse. Remember Igor in Young Frankenstine's famous line, "What hump?"

Instead of maximilism, howzabout the challenge of minimalism?

"MINIMALISM???" You screech. "Are you really a photographer Ted? Do you not understand the gearhead rush that comes with owning such an astonishingly large bag that you have to buy more to fill in all of the spaces?"

Sigh... I am trying to transcend maximilism. After years of photo therapy... I lookit the Lowepro Slingshot 200 All Weather Backpack and go AAARGH! You have made my shoulder hurt. And caused my back to hump.... "What hump?"

He he, I practice minimalism. All images of the last 10 days were made with one single prime, the Sigma 20/1.8, and before it was mostly the Sigma 50/1.4 for a very long time. It's only that I love the ability to change when I want to change.

Other than that: there are lenses that are well beyond bags 🙂

Excellent images and well worth the drive! I've seen mention of DxO a number of times. I'd love to see you do a review of it.

I went to their site and, unfortunately, they don't have a version that supports the D300 + Tamron 18-270. I looked at both the Pro and Elite versions. The combination is probably too new.

In reading the material, I like what I see. I think that it would make a great addition to my 'bag of tricks'; however, as I am saving my pennies to get my Macbrook Pro, I am not buying any more software until I get it. 🙂

Paul, I've written a whole series of blog posts about DxO. It's certainly not an in-depth review, it's what I found while using it. See here. Read in reverse order 🙂

As far as lens support goes, well, some of my favorite lenses are not supported, but that's not so important. Yes, DxO is extremely good at removing distortions, because it takes subject distance into account, but for all practical reasons you can do it later in Photoshop, using PTLens. That's available now on the Mac as well, and it has by far better lens support.

What really sets DxO apart, that is the fantastic quality of the RAW converter. Nowadays I do almost all my conversions in DxO, and certainly the high-ISO images.