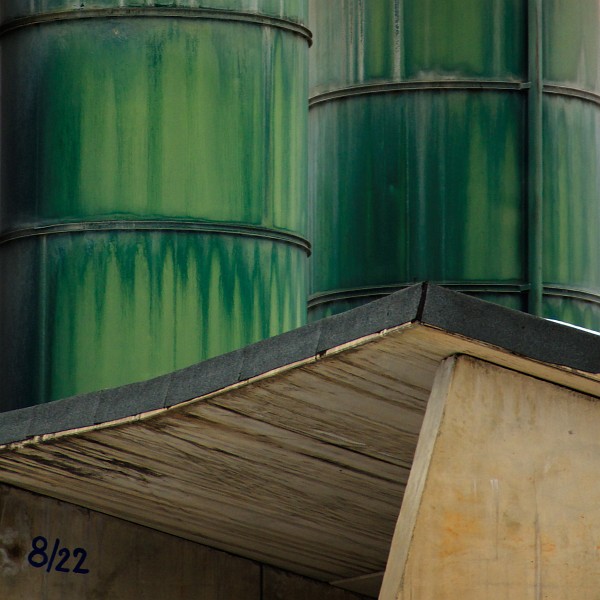 This morning (well, technically yesterday morning, it’s past 3am now) I brought the car to the repair shop. Recently I had begun to hear a strange noise under pretty exotic conditions: only in right bends, while driving steeply upwards, and only with someone sitting beside me. I had expected to get the car at around noon, and then to make another trip down to Italy, this time for the snow-capped mountains that made the backdrop for the last two days' images.

It shouldn’t come to pass. I only got the car back late in the afternoon, thus my photographic opportunities were limited to what I saw while walking home and then later back to the repair shop. On the other hand, that don’t make it junk 🙂

The Image of the Day is an unusually tight crop of an image that I actually liked well, but that suffered from the bland, bright sky. I was already going to give it up, but then I tried kind of a desperation crop. Off went everything that was sky … and I was startled. I had left less than four megapixels, but what I saw deeply satisfied me, more than all other images of today.

The second image is the whole structure from another angle, nearer now, more from below, and I like it as well. Here we are, let’s see what tomorrow brings 🙂

The Song of the Day is “That Don’t Make It Junk” from Leonard Cohen’s 2001 album “Ten New Songs”.

Well, sometimes I’m such a stupid idiot, I could bang my head against the wall for having missed the two concerts that he gave to standing ovations this autumn in Vienna. Fact is, I am on the mailing list of Vienna’s Konzerthaus, I must have read the announcement half a year before, but somehow it didn’t register. I only found out again when I read the raving critique of the first concert. Too late, so much too late. Oh well, here’s a video from Toronto.

A stroke of genius I'd say, discovering this crop. I really like the way the lines play off each other and I also enjoy the muted colours. Very nice and definitely not junk.

We were talking about you at dinner on Sunday night. You'll recall Chris and Beth from our diner in Florence? Well it seems that they and everyone else at the table of ten have visited this blog of yours over the past months. And they are not only fans, but were able to compare their favorite Manessingers, and quite impressed that Chris and I both actually met you ("Whats Andreas actually like???"). I'm certain that this posting will be particularly provocative the next time we meet. But it doesn't end with this group of Lancaster County people. Over the Christmas holiday we travelled to Pittsburgh where others talked of your work with me.

They were all referred to your site from mine, but they have kept up as well. You have developed an interesting and interested international audience here in places of which you may have never heard, but certainly, I'm sure, give much though ("What is Andreas really like?"). It's exciting to realize how your efforts are paying off Andreas. Congratulations and Happy New Year.

yep, that tight crop definitely works. The shadows of green are wonderful, supported in their three-dimensionality by the rings and the traces of eroding color, and the wooden structure below comes up in such a sudden that there is a lot of tension in this image. A top-level end of the year shot.
All the best to you, and a happy new year.