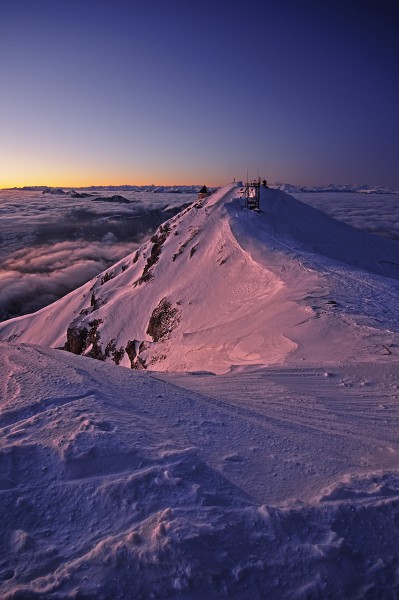 This morning we had high fog, according to the weather report reaching up to 2000 meters, thus I planned to avoid Dobratsch (which is 2166 meters) and really go for the Sella Nevea trip. Of course I was late as usual, and as I was just about to drive out of Villach, the clouds broke up and I saw the summit of Mount Dobratsch in glorious sunlight.

I gave in, changed my plan and drove all the way up to 1732m, only to be greeted by dense fog. I put on my moon boots, gloves and the headband, marched on, and really, the fog went away in minutes, never to come back for the whole day. Sometimes it pays to be obstinate 🙂

On the way up I met a young man, photographing with his two weeks old Canon 450D (that’s the Rebel XSi for you Americans), answered some basic questions about white balance, and so we went and shot together. He had to turn back early though, because he had wife and daughter (as far as I remember) waiting down at the inn. (Hey, I gave you my card, but I didn’t even ask for your name! Sorry.)

It’s really a pity, because from last year’s excursion “491 - Just In Time” I knew that the sundown at the top can be breathtaking. This was the last image that I took before we parted, then I began the long walk up to the summit, all the while people coming down, I being the only one going up. They don’t know what they miss, or they don’t care about the same things that I do, but I’m fine with that. It’s pretty overwhelming having a whole mountain for yourself.

The problem with the way up is, that in the afternoon you walk in the shade for a long time. Even worse, you don’t really see what’s ahead of you. It’s one long slope that the way crosses, and I remember when I first went up last year, I always asked myself when it would finally end.

The first time you really see the summit, it comes as a shock. It just has looked as if it were over, as if you had already made it, and then you reach the plateau and see the antenna tower and one of the two churches (yes, there are two churches on this mountain) in quite a distance. In reality it’s not as dramatic as in this image, this is really wide angle at 10mm.

The first four images are JPEGs straight out of the camera, shot at automatic white balance, the last two and the Image of the Day were edited. The image with the avalanche barriers and the antenna tower had a flare that I’ve taken out and this one needed some more local contrast in the snow.

All images were taken with the Sigma 10-20. There would have been some opportunities for longer lenses, I carried them with me, but I did not bother to change. In reality I knew what to expect at the summit and did not much care for any of the other pictures. I really went up for that one image, the Image of the Day, an HDR made of bracketed exposures shot from the tripod, and of course very wide. For this image I stood behind the church seen in “491 - Just In Time”, three steps from a cliff falling more than a thousand meters.

I could have stayed a little longer, it’s such a majestic and magical place and time, but it was really cold up there, thus I left after I had taken this image and made sure that it was technically OK. The night was extremely clear, half a moon lit my way down and I enjoyed it greatly.

Yesterday I wrote about James, and funnily enough, searching for a song to title this image I tried “top” and stumbled upon “Top of the World” from James' 1990 album “Gold Mother”. See them perform live in Manchester. There is something magic with people performing on home turf, and this is no exception.

beautiful as always.... I hope that 2009 brings good things your way your art continues to inspire me to use COLOR!!!!

Beautiful. I really like the way the clouds give you a chain of islands to walk on in the clouds. Figuratively, that is.

Great image - showing how it feels to be at the top of the world. And a nice story about the moonlight.